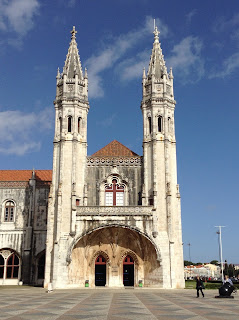 The Maritime Museum is in part of the Jerónimos Monastery, so I got to see some of that without queuing. I'd heard it said that the museum was just room after room of model boats with no real attempt at a narrative. One thing I particularly held against them was the way they hid this beautiful artwork where you can hardly look at it and didn't even bother giving it a label.


And then, there's this beautiful cabinet that looks like a reliquary and could be practically a museum in its own right, hidden in a dark corner with no explanations. 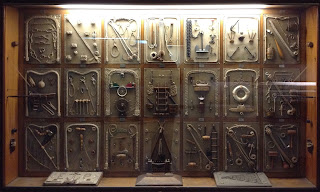 The first rooms of the museum are given over to a very good presentation on the Age of Discoveries. The best thing about it is that it makes you realize the Age of Discovery didn't suddenly come out of the blue. It mushroomed out of traditions of ship-building and sea-going which had been a way of life in these parts for centuries, possibly even millenia. Its expansion and development seem to have been due to the political and economic ambitions of the elite, but the resources they drew on were already there.

It really isn't a particularly easy museum to photograph, but here, for example, is a model of the ship in which Vasco de Gama sailed to India, with a real image of St Raphael which accompanied him. 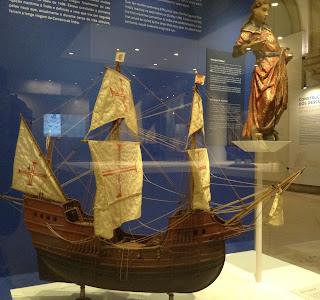 This reproduction of a map, from about the same period shows the detailed knowledge the Portuguese had of the Mediterranean and African coastline and also the fort now known as Elmina and a major center of the slave trade, though at the time it was called A Mina - the (gold-) mine. It was the first European construction in sub-Saharan Africa, about 20 years old by the time this map was made, and it was pre-fabricated in Portugal (stone and all) and delivered by ship! 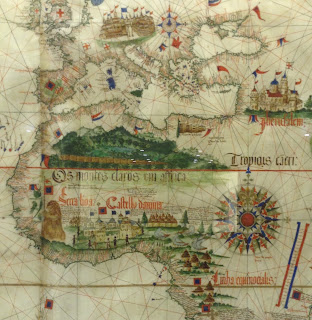 After that there is indeed room after room of model boats, many of them of a military persuasion. 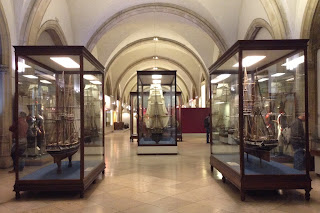 The one thing I did appreciate was the room dedicated to boating in the lives of ordinary and not particularly wealthy workers.

In sharp contrast, the museum seems to have saved the personal cabin of King Carlos, the one who got assassinated, from his yacht, the Amelia. 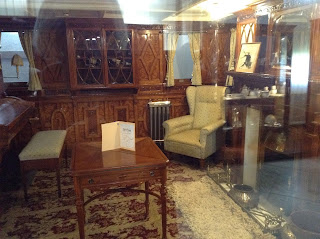 The great thing about Lisbon is that you can still see real ships out in the clear light of day. Now I come to think of it, I don't think there were any models in the museum dedicated to container shipping. 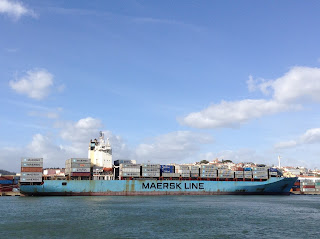