I was going to walk through the Alfama today, but I got distracted by the pretty crescent shape of Costa do Castelo in the Atlas Urbanistico de Lisboa. It's seems quite appropriate, in that this is one of the oldest settlement sites, just below what is now the Castelo de São Jorge. The street plan is probably pretty much as it was in Roman times. 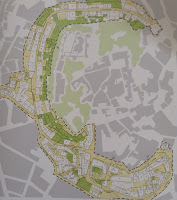 In a way, this is two posts. Most of the writing is about Roman Olisipo. There's only a few fragments of that left, so most of the pictures are from Costa do Castelo, which I liked rather a lot.


Olisipo is the ancient name for Lisbon. After it joined the Roman Empire, it became Felicitas Julia Olisipo, Felicitas Julia being a goddess, I suspect. There is a vague suggestion that the name Olisipo, or Ulissypo is related to the Ulysses of Greek myth who would have founded Lisbon during his travels, but I have come across an alternative and more plausible suggestion that the name meant 'friendly bay' to the Phoenicians.


It's easy to imagine the pre-Roman settlements as a straggle of poor fishing huts, but I'm pretty sure that would be wrong. Olisipo had been on the Phoenician trade routes for centuries before it became Roman. It became a strategic ally of Rome in its struggle against Carthage and seems to have joined the Roman Empire more or less voluntarily soon after that.

To get this big and to be worth having, it had to have something to trade. In the part of town I lived in, the Baixa, they've found enough remains of cetariae to suggest fish salting on an industrial scale. Cetariae are big tanks for salting fish and especially for making fish sauce. What they did, apparently, is expose the fish, in this case probably tuna, to the hot sun to macerate in their entrails for about two months, using plenty of salt to stop them turning nasty, but not, I suspect to stop them smelling nasty. Back then, it must have been worse in the Baixa than a whole street-full of bacalhau shops! No wonder people preferred to live up the hill. Anyway, after two months, they filtered off their jars of delicious fermented fish product and shipped them all over the Mediterranean.


When the Romans did arrive they left their mark with a typical set of institutions. Where Rossio Square is now, there was a big circus. There were baths of course. There was a really big theater, which you can still see bits of, just uphill from the Cathedral. 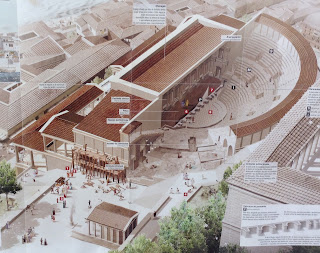 These are the pillars for holding up the stage, with a drainage system, collecting water in that circular area. 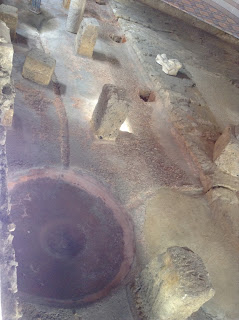 Under the cathedral cloister were a couple of taverns (for pre-theater drinks?). What we're seeing here is a Roman street, lined with shops, which somebody built a wall across in the 4th century AD. 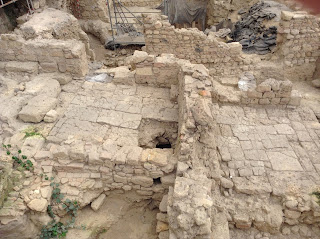