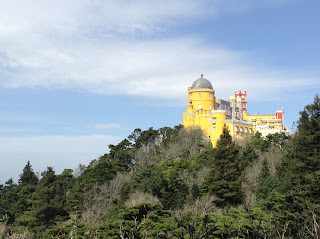 Pena is an 18th century Romantic palace and park belonging to the Portuguese royal family. Many palaces exist to display status at every turn, but one like this is more of a walk-in (live-in, for the original owners) piece of installation art. Here they played at being lords and ladies out of medieval fantasies, or artists, musicians and poets instead of rulers. Notwithstanding the fact that their ownership of this artwork was based on extraordinary privilege and still requires a small army to maintain, we get to enjoy it now. 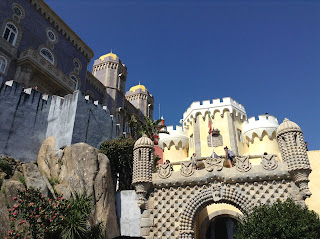 Roughly speaking, Romanticism encourages the viewer to project their emotional and spiritual states onto landscapes and architecture in a way that's intended to be cathartic. If I were to make a formal analysis of its strategies, I would note the range of environments as you move through it, the changes in scale, from the 360 degree view of the outside world at the pinnacle of the High Cross to the forests of lichen, mosses, ferns and ivy, growing across rocks or in the fissures in trunks or between stones at the Cross's feet. From here, you can see what is going on in Lisbon or watch insects go about their business. 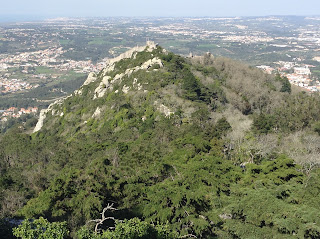 The artists incorporated what history offered them in the form of a monastery, Moorish artifacts, and a distant memory of generations of farmers dating back to Neolithic times, still hunter-gathering on these hills - a tradition which the royal occupants sometimes continued. There are also additions, for example, a simple private temple for solitary spiritual contemplation - a little gift from a father to a son. 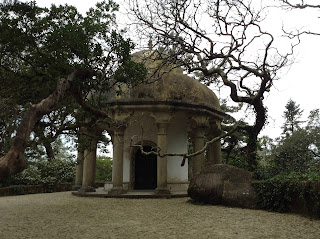 The artists also incorporated nature in the forms of piles of rocks filled with significant form, in Romantic terms anyway. But what do they signify? Some have been given human meanings: one supports the statue of a vigilant watchman. It's a lookout post then. Another, rimmed by a low bench becomes a shelter, from the wind at the moment, but usually from the sun. And the others? It's up to the viewer, but perhaps they represent the work of slow time with its powerful forces of transformation, erosion and entropy. They announce a transience that eludes us, since as far as we're concerned they might as well be eternal. And so the artists confront us with scales of time as well as space. It puts us in perspective, and that's another thing Romantic art aimed at. 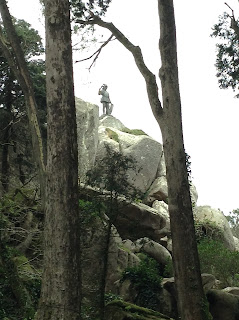 What most people do instead of appreciating these efforts, is make a beeline for the palace, tour it quickly, snap some photos and leave to see how much of the rest of Sintra they can pack into one day. It's a shame, because although you can stroll through the rooms and have tea on the terrace, that's the extent to which you can actually use the palace part of this artwork. Whereas the park is fully accessible, with the castle as the most prominent piece of architectural backdrop (and by the way, you can take tea on the terrace in exchange for just the park entry fee, which is about half the amount you must pay to walk through the rooms as well). 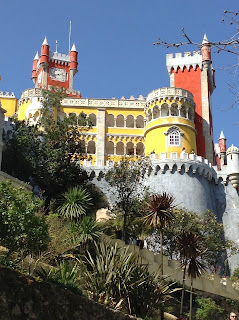 The park does display a phenomenon that probably only annoys people in the age of photography: it doesn't lend itself much to snapshots. Being 19th century, it would prefer drawings, paintings, poetry, or perhaps to be the setting for a gothic novel or a fairy tale. It adds to the mystique of the Wild Wood to have black trees veiling castles and framing distant blue-gray landscapes. But it doesn't photograph well. 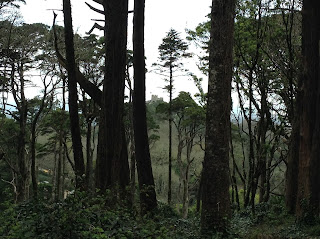 It's necessary to take a lot of time over a place like this. Ideally, every part of it would be experienced at many seasons, times of day and weather conditions. Right now it is cold, because we are surprisingly high up. and the wind is whistling in the pines. Still, it is spring, because there was a fat bumblebee flying low over the periwinkles, and it seems very quiet because hardly anyone comes this way. 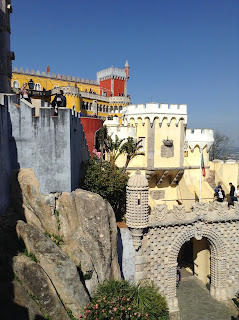 After a while, I reached the more sheltered side of the hill where birds sang, then emerged from the woods into the gardens. The scent of the air changed and the sun came out slowly. There are goldfish in the water features and red camelias here, but everything has an abandoned, overgrown air. The ponds are choked with algae and fallen leaves. It was probably not supposed to be like this, but things that are on the way to ruin will also do quite nicely in a Romantic artwork. 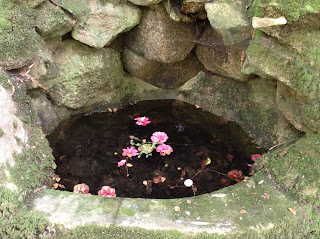 Here the paths are many and labyrinthine and the features more numerous: a chapel, a hothouse, walls, fountains and terraces. The air is warm, the ground moist, there are odors of decay and the walls are painted with age. 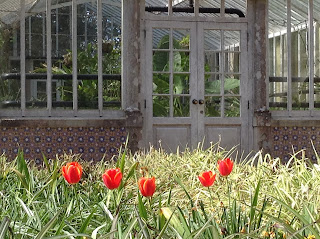 Now it is the contrasts of light and shadow which are too strong for the camera, while the subtleties of decay and overgrowth are too delicate. The best thing would be to wean myself from it altogether and simply sit in one spot for an hour or more, on the bench known as the queen's throne looking out over the castle for instance, or among the tulips in front of the old hothouse or in a circle of azulejo benches. I stayed all day, and only got to see about half of the park. Really, if I had my way, I would get a place in Sintra and come here every day for a month and work on this idea for a Gothic fairy tale I've had.
at 14:48