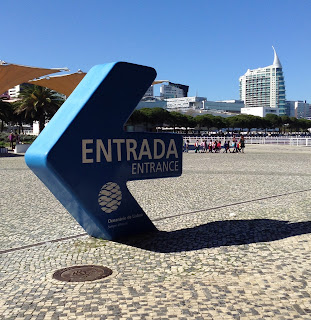 I can't remember when I last saw so many kids in one place, but that's what you get in aquariums. Technically, there are not more kids here than fish, but sometimes, you start to wonder. 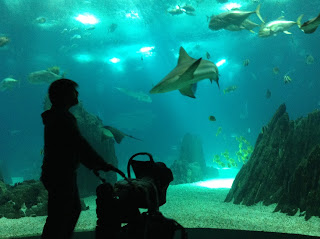 I've been in a lot of aquariums (aquaria?), so I'm not easily impressed. In the end, I decided this one was pretty good. It's features include the design of the central 'big tank' with so many windows that you never really had to fight for space, the four outdoor spaces (which I guess we owe to the climate), and the variety of aquatic creatures, including penguins and sea otters. They're particularly proud of their sun fish which is so big it won't fit in the shot. 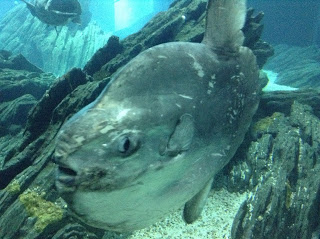 The lousiest thing about the Oceanarium is that the fake mussels and starfish and so on, not to mention the fake snow in the penguins enclosure, are very, very fake. Look, you can even scrub them with scrubbing brushes to keep them nice and clean! This was a quiet morning at the zoo, with lots of people in scuba kit and scrubbing brushes in the tanks. 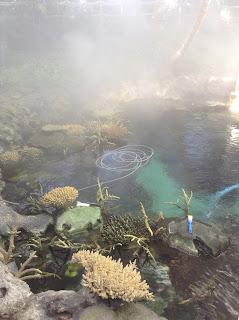 
This is where I was when I was talking to Mike on the phone. He likes to know these things. 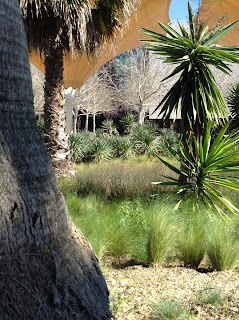 This is the Lisbon Oceanarium's temporary exhibition, and also the best bit. I spent nearly an hour in this room. I would go back.

So here is a video. I didn't take this video as everyone can tell, but this aquarium garden really lends itself to professional quality video-making.

Amano uses everything it's possible to use in his gardening. Forests of shape and color. Leaves resting on the surface or emerging from it, leaves blowing in the current. Depth, layering. Deserts between the forests, crawling with herds of shrimp.

The tiny fish give a sense of scale. Tiny blue leaf-shaped ones against red leaves. Medium ones against the opal background. Many are grazing, a few are defending territories. Many stay in their own plant masses, but I followed one explorer three-quarters of the way along the tank until it met another of its kind going the opposite way and turned to follow. Some form schools or pairs and a few species will even join schools of other kinds. It was worth taking a lot of time to observe them. You can learn far more about fish behavior with an arrangement like this than in any aquarium I've seen before. Now if only I knew their species.

Somehow, I'm much more interested in the names of these little things than I am in the big ones in the main aquarium. Maybe if I go back, I will try to learn their names first.
at 11:01