The second thing you notice about Lisbon is that there’s architecture everywhere - not just buildings like you get in some cities. For instance, I live two and a half minutes from this thing called Praça do Comércio, a massive open space facing onto the Tagus River, surrounded by architecture, which in its turn is filled with touristy cafes and so on. Why is this here? 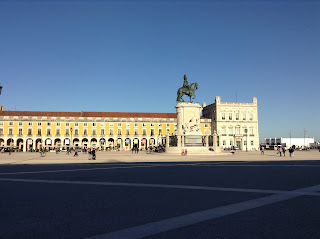 Obviously, there had to be a perfectly logical explanation: it was the site of a palace which was destroyed in the famous Lisbon earthquake of 1755. What? You’ve never heard of the Lisbon Earthquake? Well, it’s basically Lisbon’s Great Fire of London. When they did the big rebuilding, they turned this place into a center of commerce, by which they meant the major international kind, with port authorities and customs officers. Think World Trade Center. 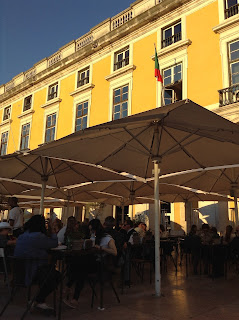 In the middle of the square there’s a gigantic memorial to the king of the time, and in the middle of the architecture, there’s a massive triumphal arch dedicated to various virtues and leading to a pleasant pedestrian street where they try to serve the tourists bacalhau (salt cod), or failing that, burger and chips. At the far end of this street is Praça Rossio which is almost equally monumental. The first thing you notice about Lisbon is that someone in its past was very keen on monuments. I suspect a chap by the name of Pombal was responsible for this. 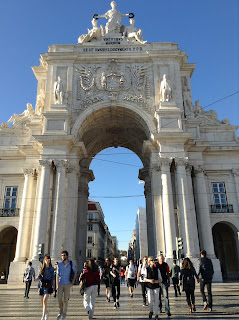 This Praça do Comércio is pretty much cursed to royalty. At its far end is the Cais das Colunas where ferries from the opposite shore used to arrive. Right at the start of the 20th century, the king landed here on his way back from his summer palace, crossed the square, and was promptly assassinated. The Portuguese monarchy did not last much longer. 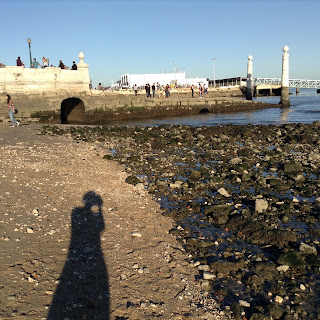 The Pier of the Columns is a nice place to sit and listen to the water and buskers or watch the seabirds and people and remember that Lisbon is an Atlantic-facing city, with the Tagus estuary is its harbor. Apparently, people used to bathe nude here, or from the small beach that appears at low tide. These days it's really only for that elite group of people that isn't too choosy about the state of its beaches. I kind of picked my way across it.
at 09:26