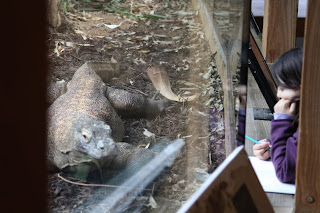 After getting up at 5am British time, taking a bus, then a plane, then a train, then the London Underground, we made it from Grenoble to Euston station by midday. We played an amusing game called 'condense your multiple suitcases into one big one' at the left luggage office, so that we would only have to pay one exorbitant fee. After that, Mike went off to a friends to recover and Antonia and I went to London Zoo. Quite an expensive afternoon, but as usual it was fascinating and there is far more to see than we could possibly manage. We saw two shows, drew lots of animals in the reptile house, and photographed lots of animals in the aquarium. We are not so much into the big animals in this family (except aardvarks and komodo dragons).

Actually what was really interesting us on this trip was the interaction between the animals and the zoo environment. Antonia likes searching for the frogs and snakes in their tanks. I liked looking at the cross-sectional poster of the aquarium and realising that I was standing on top of huge tanks of water - and realising that yes, a huge amount of technology and specialist knowledge goes into maintaing these animals.

It's interesting when things don't quite work out the way the zoo would have liked. At the penguin feeding display, they would like to show us penguin feeding behaviours, including the penguin chick who is supposed to be learning to take food from the keeper, but prefers to beg or steal from other adults. I think I know who is setting him a bad example. Three or four herons had flown in from Regents Park on schedule for the feeding. There is an overhead electrified wire but it didn't seem to stop them. Still, after eating himself silly, one of them must have forgotten about it. He flew into it and crashlanded in a heap on the far side of the penguin pond. It took him awhile to pull himself together again.
at 18:34