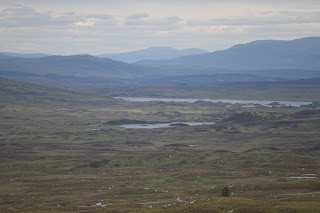 We paid the price of having the laundry done by the hotel staff this morning, because we had to start getting it back and sorting it out, when we should have done that last night. It seemed like it might be one of the harder days of walking and I was very keen to leave by 8:30 am. The only way this was even remotely going to happen was if I sorted it out while the other two had breakfast. I am afraid my colleagues have absolutely no grasp of how long things take, and I'm sure we would have left at 10.30 am if I had just sat back and let them get on with it.

As it turned out, I needn't have worried. We did the walk in double quick time and are relaxing at the Kingshouse Hotel, and, well, waiting for the shower. A few days back, under a railway bridge in the rain, a guy had warned us about the territory after Bridge of Orchy, while giving Antonia a doubting look. I can see what he means, in that if the weather conditions turned wet and windy, it could be horrendous. It is a long, long walk on an old drove road over open, mostly boggy, moorland. It must have been grim work building it, and very helpful when it was made. It's hard to imagine how the cattle got across this mess before that. As we had fine, warm weather, it was really a walk in the park for us. The so-called climbs are a bit of a joke to people who live in the Alps, but this is the kind of landscape I really love, and which makes me remember how closed in our own mountains can feel. We could see for miles and miles across Rannock Moor, so far that the distant mountains really did look blue as they are supposed to. We found a nice breezy spot for lunch off the path to avoid the midges. Antonia was over the moon because we found some insect eating plants (called sundew or drosera), a large feathery moth let her hold if for a while, and she found a dragonfly 'as big as a robin'. She got her feet completely soaked while she was looking for it, but she said it was worth it. We also saw the military jets on their practice runs flying low up the valleys. They make a few passes a day, so it is more entertainment than a nuisance. There were also military cadets out doing some kind of training on bikes, and an old guy sitting at the top of the pass, sunbathing and playing a giant game of draughts. He said his job was to give them a 'safety briefing' (e.g. lecture on not speeding) before they began the descent.

When you see the Kingshouse Hotel in the distance, it's this tiny white thing, dwarfed by the huge spaces. When you get inside it seems like a maze, with more buildings through whichever window you look out of. In decor it reminds me of one of the smarter places my parents would have taken me to stay long, long ago, in the seventies. I am having a bit of a nostalgia trip with that, and don't even mind if I don't make it to the shower and end up washing with a flannel. Also, I am downstairs, in the bar, BY MYSELF, enjoying a glass of wine and some garlic bread, because Antonia and Mike are playing in the room. That is really nice. Antonia's got her endurance up alright, she was frankly giddy for most of the afternoon. There is one thing about Scotland that she really, really likes, and that, I am afraid, is Scot Loos. They are blue portable toilets that you see all over the place and I think if she had her way, Doctor Who's Tardis would get 'upgraded'.
at 17:33