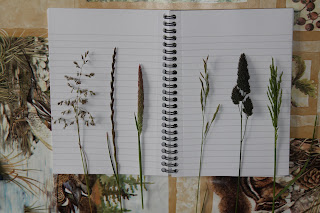 This was really a working day, at least it was supposed to be. It was more a day for discovering that Antonia is totally disinterested in anything except natural history (and poetry), and that only in a haphazard, low-concentration kind of way. Anything that has to do with people or technology or thinking about something for more than three minutes in a row gets impolitely ignored. I suppose she did learn a few things about doing research on the internet. Mind you, I am not such a great example. We went for a short walk to Lerwick Head, and I made Mike stop the car twice: once to photograph a lapwing, and another to photograph a curlew. I have a nice collection of bird photos, but they all need cropping. Antonia did not really come into her own until about 5pm when she started collecting and drawing grasses. Mike got lots of work done today as well.

Orkney has the healthiest seaweed biodiversity of any place I have ever been to. I found several more kinds today, including some that look like mushrooms. It's certainly pretty good for birds as well.
at 18:12