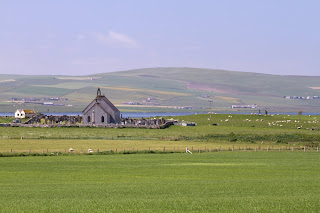 We drove to Skara Brae on the West Mainland to see the major neolithic sites. As we passed Finstown, the skies cleared to a beautiful blue. The four wold heritage sites lie on a line approximately between two large freshwater lochs, and we had dazzling views of the Stones of Stenness and the Ring of Brodgar as we drove through. Lucky, because we didn't really end up with time to go and seem them. We spent a while at Skara Brae. I already knew quite a bit about the site so there were few surprises. The little museum and reconstructed house were unexpected and very nice to visit. We also went to 'the finest neolithic tomb in Europe' and saw Viking graffiti along the lines of "Ineberge is the fittest woman" and a dragon.

After a very late lunch, wee returned to our local beach, the thin natural causeway between East Mainland and the near island of Deerness. On the rocky side we found only the usual things, though I did find several new species of seaweed I didn't get to yesterday. I watched the tide a bit anxiously, knowing that it was coming in, upredictably due to the uneven shoreline and the mist. The most exciting thing that happened to us was seeing one of the piractical birds, perhaps a skua, actually attacking an ordinary gull (as in David Attenborough!). The two flew low over our heads for about a minute, both crying loudly. I couldn't tell why the skua was pursuing the gull, in any case it got away. Of course, the camera had about five things that needed adjusting before it could even think about taking a picture, so I didn't stand a chance. Oh and we also found the highly decomposed carcass of a seal pup (I think). Yuck! 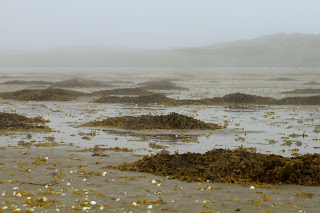 We walked out into the broad stretches of the lagoon and had soon lost the road behind us in the mists. I wasn't too afraid that we would lose our way. Every so often, a car would rumble unseen on the road behind us. Even if there had been no road, the mounds of seaweed lay with their fronds pointing inland. Drifts of white shells had been trapped behind them, in a small triangle protected from the outgoing tide. It was still a strange feeling to be lost in the endless grey of sky, and wet sand. Every so often the sun would dominate, and light up the mists around us to a golden glow. Anywhere further south, it would have burned through in minutes. At other times, we would find ourselves in denser fog, with fine droplets blowing against our faces. The mounds of yellowish brown seaweed and the tiny coiled cones of the lugworms as our only landmarks. Antonia noticed these were of a different colour from the sand around them. We found out that the top sand is a golden brown colour, whilst only a little way down, it turns dark grey. We found that out because, despite her disdain of Neolithic houses, Antonia obviously has some ancestral instincts lurking deep within her. She discovered that she could crack the cockles open on a rock - there is one rock, it seems, in the whole lagoon. But most of the cockles were empty, and were only hard to open at all because they were held together with algae. So then she learned that she could find live ones by digging. So she dug and cracked quite happily for more than half an hour, with her hair trailing in the sand. I think she might have done quite well living at Skara Brae, though it certainly more comfortable to have warm baths and bread and jam at home.
at 22:37