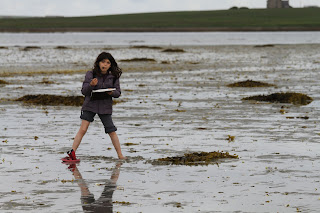 Antonia at work, drawing seaweed
We got down to some serious natural history work today. After a bit of maths over the Internet (which blissfully worked for about half an hour), Antonia and I went down to the beach to study seaweed and various other things. We spent the first hour generally beach hunting, and the next hour drawing and writing about all the kinds of seaweed we could. For written resources, all we have are a seashore sticker book, an Orkney nature detective book and some natural history leaflets about Orkney. It seems like nearly nothing, but it's enough.

After lunch, we dragged Mike out for a hike around Mull Head on Deerness. We really excelled ourselves on this one. It was a five kilometre hike, and it took us five hours. That's because we did some serious bird watching and also tried to get to grips with our camera. The first part went very well. We were excited to see puffins for real, and also some razorbills. I don't think we would have found them without the help of the real birdwatchers on the cliffs. The camera, we are having trouble with that. We are just about in a position to prove we have seen puffins, but not until I'm able to crop and sharpen them up in photoshop. 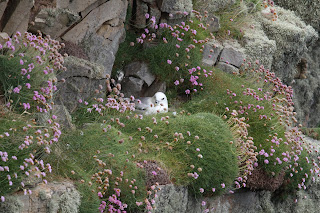 Cute, but not a puffin!
In the meantime, the clouds were swept away, leaving bright blue skies. Orkney is like Iceland in that when the sun is out, it glows. And this evening, Mike might have, maybe, probably fixed the Internet. I'm sure our hosts must think we're crazy caring so much about the Internet. Our usage isn't quite what people who use the Internet a little bit must expect. Leaving Mike aside, one minute I'm looking up the weather forecast, then the tide tables. Then Antonia wants to find out what insect lives in Cuckoo Spit or what a Bloody Henry starfish looks like. Next, I want a recipe for flapjacks, or to know when Skara Brae is open, or what concerts are on at the music festival. Besides that, having the Internet gets us out of lugging books around, since we can read something on Gutenberg. It's not a case of constant usage, more constantly intermittent.
at 23:38