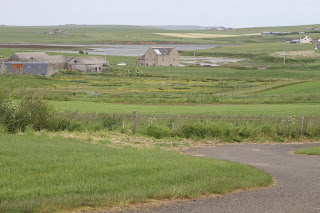 View from Horrie Farm in Orkney
In various ways, we have worked our way through the whole of Scotland: from the border to Milngavie by train, to Fort William on foot, along the Great Glen to Inverness by coach, then up to Orkney by coach and ferry. After all that walking on the West Highland Way, it feels strange to be sitting on coaches. We had great views all the way, though I have been along Loch Ness before and I find the landscapes around there too banal for my taste. This just means that it looks a lot like the lowlands of Yorkshire where I spent several years of my life. It's very nice really, and probably quite exotic to some people. I think that Mike, for example, finds this area very attractive. We wandered around Inverness a bit in the afternoon. For the last eight days we had no time to do much except walk, wash, eat and sleep. Now that we have nothing much to do I think we're torn between creativity and exhaustion. Antonia and I started thinking of art projects, and we are all thinking (not very enthusiastically) of getting back to a bit of work when we get to Orkney.

Inverness has very good restaurants and we found a nice seafood one for dinner. The food and wine were excellent, but everyone is too tired to talk, and it's pretty tedious just sitting around eating. We might have been better off in a pub, with a football match to entertain us, though I don't think I could stand another plate of chips.

We got up in time for the 7:30 coach to Orkney which took us through beautiful countryside along lochs and firths, across new causeways, where, until a couple of decades ago, we would have had to take ferry crossings. Since this coach doubles as a tour bus, we had some commentary along the way. I was struck by two hilltop monuments, created by the landlords of the areas we passed through. One was ordered by a local lord as a way of keeping his tenants employed during a famine. The story goes that he paid a day-shift to put the monument up in the day, and a night-shift to undo their work - the idea being that they were too proud to just take the money. I couldn't make out what the monument was, but it is apparently a copy of something he had seen in India.

In the other case it was the landlord who had a problem with pride. He had his tenants erect an immense statue of himself as a 'loving' memorial. From a distance, I thought it was one of those statues of Mary that you find in southern europe, and it seemed rather out of place. This earl of Sutherland was not very popular because he was at the forefront of Highland clearances. His county of Sutherland is one of the prettiest we passed through. As we reached Caithness, it really felt a little bit like the ends of the earth. Half the houses are abandoned, and not just very old ones. It is very windy today, and the sheep and cattle, like the remaining houses, have an enduring look about them. Mostly they are lying down in little huddles. There are virtually no trees, except where householders have built fences and walls to nurture them, but not all the land is pasture either. There is a lot of black moor. Off shore, we can see a few drilling rigs, which seem to be keeping the towns going, but our commentator told us that about 150 years ago the area was the centre of a herring boom, and so overpopulated that workers were housed in horrendous conditions.

The impression of delapidation increased when we reached John O'Groats ferry terminal which consists of a few squat buildings for cafes and shops and a ruinous but very over-the-top Victorian Gothic hotel. It was freezing cold, with a strong wind, and I wished I had dressed rather differently. Our ferry, when it arrived, looked so small I thought for a while we were going to have to sit outside, but no.... We were down in the hold, on basic seats that had been bolted to the floor,with our life jackets in nets along the walls. I rather thought I wouldn't be needing mine in any circumstances, as the water would be cold enough to finish me off on contact. Being a smallish boat, our ferry went up and down rather a lot, and before long, dogs and children started getting sick. I advised Antonia to look out of the windows to try to anticipate her motion, and she pulled through, though she looked a bit pale at times. Orkney was a very welcome sight, though it was a bit of a shock when we found out that the crossing we had taken was the shortest possible one. I do know there are much larger and presumably more stable ferries than this coming into Orkney, but this is the one the Inverness bus takes you to.

In fact, we had been able to see Orkney from the mainland, it is so close, but when we actually got our feet on it, it seemed very rich and green and, well, safe. It has a less desolate feel than Caithness, although all the houses are still very sober and plain. When we got to Kirkwall, we found that everything was very close and convenient. We got all our information about what to do around here, an excellent sandwich in a cafe-come-music-centre, our hire car and our shopping, and we found our farm out in the country without any trouble. The only fly in the ointment is that it is bitterly cold here at the moment. It reminds me of the first day we spent in Iceland, when I wondered if were even going to be able to get out of the car. As soon as the wind dropped, it got reasonably warm there, and I think the same will be the case with Orkney. I hope so, because I'm looking forward to just messing around on beaches and archaeological sites and taking short walks. Though, if it rains, there is a pool table here, and plenty of other things to do.
at 18:58