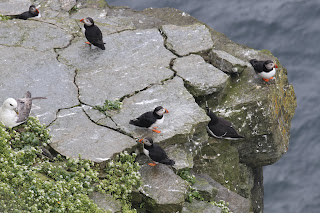 There's something about wind when you're not used to it that's completely exhausting. Orkney did the wind thing on us today. It blew so hard that the weather fronts sailed over fast enough that we had everything two or three times: clouds, rain, and bright sunshine. It was just like those unbelievable weather icons that try to show every possible weather type in one picture. By the time I got home, I needed warm food, a large glass of wine and a bath, just to restore my body's reserves! Anyhow, today was our big touring day. We went to the Ring of Brodgar, the Brough of Birsay and the Broch of Gurness. The last two were places on our Orkney Explorer passes. The Ring of Brodgar is part of the Heart of Neolithic Orkney complex. In between all that we went and searched for Groatie Buckies or European Cowries on Aikerness Beach, but although we found just about everything else there, we drew a total blank on cowries. If you wanted periwinkles, all you have to do is put your hand down and scoop, and up they come, in every possible colour. The people staffing the Broch of Gurness told us cowries were more common in winter. Oh well! At least we found hermit crabs and shore crabs in abundance today, so that just about makes up for it.

We also spent a certain amount of the day instinctively looking for shelter. It's incredible how exposed a great flat tabletop of grass such as the Brough of Birsay can be, but fortunately, nearer the sea there are all kinds of collapsed bits. We hid in one of them for lunch, and Antonia and I hid in another while Mike leaned over a high cliff getting a really good shot of some cooperative puffins. Lucky Antonia had already seen some, because we weren't too keen on having her so near the cliff edge. I think the strangest things of our day were seeing a party of teenagers in full swimming gear walking across the Brough of Birsay causeway soaking wet through. They had clearly been swmming, but they weren't getting any drier just then, because it was raining hard and the windchill factor was intense. They looked cold. So did we, and we were in all of our warmest gear. Mike was wearing his New Zealand hat under his North Face jacket hood and his scarf wrapped around all that. I was envying the scarf. The other strange thing was a chilling tableau someone had constructed at the end of the causeway. A freshly dead decapitated swan lay spreadeagled in front of a tombstone that had been constructed from the local beach pepples. Ugghh! what were they thinking. Orkney is wild enough that there are plenty of carcasses around, especially of birds, and I can cope with that, but there's something about this 'iinstallation' that's quite freaky. I suppose the person who built it had a different view, and I know Mike finds our biology-orientated interest in dead animals a bit icky.
at 15:23