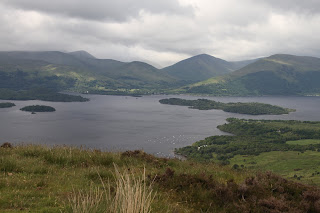 Today was a lot more exhausting than yesterday, even though it was just a tiny bit further. It was also a lot more beautiful. Maybe it was the long climb up through the conifer plantations to conic hill that did it? We had lovely views over Loch Lomond and its islands from up there. We made it to Balmaha for lunch by about 2:00 pm and that food also turned out be very good, the best meal so far. Mike and I have fallen into the routine of sharing a meal between us. It's kind of tedious having to negotiate each time, and it takes some of the fun out of eating out, but at least its the right amount of food. I learned some interesting things in the pub about the allegedly superfast evolution of arctic char after they got stuck in the Scottish lochs at the end of the ice age. I never really thought of lakes as being like islands for freshwater animals, but I can see how they could work like that and encourage diversification. The weather took advantage of our lunch interval to get its raining over and done with.

Apart from that, our Scottish weather has been more sunny than not, but rather melodramatic and occasionally ominous. In the afternoon, we walked along the Loch, up and down, up and down, and before we even knew it it was past 6.00 pm. I had an attack of whatever stomach bug Mike picked up in Paris, Antonia had a headache and sore feet and we pretty much limped along the last stage. We stopped at Rowardennan Hotel for dinner where Mike and I were able to bask in a bit of reflected glory from the acclaim that was really meant for Antonia. On the WHW, you pretty much see the same people time and again, so we are starting to know our crowd. After dinner, we walked another half mile along the road to the youth hostel in the freezing cold wind. We've got a nice room though and right now I'm planning to sleep in it.
at 18:04