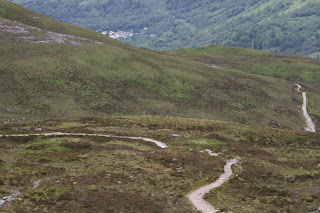 Another shortish day although it included what passes as a climb up the so-called Devil's Staircase. It was easy enough. I have noticed that the West Highland Way mostly follows the line of old roads, and they always took the easiest way, mostly along the flanks of valleys. If there is a pass to cross, you can guarantee it will be at the lowest point. In the end, we probably dawdled a bit too much at the top, because we found the descent into Kinlochleven a bit tedious. Our book says Kinlochleven is no beauty spot, but we actually like old industrial stuff to look at. The last part of the descent was enlivened by the huge pipes of a hydroelectric system, and our hostel was right opposite the powerplant. This was 19th or early 20th century, so quite a pleasant brick construction.

It was actually the woods around Kinlochleven that I found to be very ordinary and unattractive, but I suppose the valley must be quite sheltered to be allowing them to grow at all. We hung out in the hostel for ages - it was actually quite nice since we had a private room and private bathroom. We eventually wandered down into town where there was a choice of pubs. We ended up watching South Africa lose to Uraguay in the World Cup, and let Antonia have a go at pool, so you could say we got into British pub culture. On the way back, we passed a huge climbing gym, the Ice Factor, and Mike managed to get them to let him in to look at their ice wall, with real ice! It's actually very impressive. You go into this enormously tall fridge with ice absolutely everywhere, it does cost a fortune to keep it cold. Mike and Antonia went back to take some pictures and I think Antonia had a little play in there and was very pleased with it. The climbing gym is not all ice, there are a lot of regular climbing walls as well (and a bar!).

It's hard to believe it will be the last day tomorrow, though it's a long one.
at 17:50