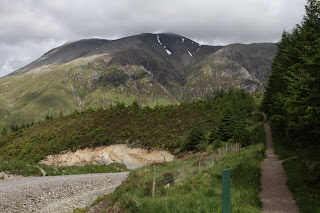 It was a long climb out of Kinlochleven but that was pretty much the hardest part of the day. The weather is amazingly fine again, though apparently it has been very wet at home. Once we climbed above the treeline we had another of those long straight walks across moorland where you can see the path for miles. This was one of the longest days of walking, about 23 km in all so we tried to make good time in the morning. We arrived at a point where there had been clear cutting some years ago and had to walk through several kilometres of desolation. The foresters do not really tidy up after themselves, they leave portions of dead trunk standing and rubbish all over the floor. In our part of the world we have a different kind of forestry where they mostly take out individual mature trees or small patches, so we are not used to this. Eventually we got to a section where the forest was still standing, and it gave us an idea of what the whole area would have been like. Of course, these are not natural forests, but they do provide a different habitat. As soon as you get inside, you hear the humming of insects and the call of birds. The forest floor is very dark, but near the paths and clearings there is quite rich greenery (but not many species, it would seem). I am surprised how boggy the ground is as soon as you get off the paths, just about everywhere. It seems that the conifers find it hard to get a firm anchorage, because quite a few of them fall over, taking their shallow roots with them. Of course this creates more clearings, which may be bad for the foresters, but is good for the plants. The mosses here are enormous, and the trunks of the trees are reddish and very Scottish looking.

Until now, I was struck by how different the Highlands are from our own mountains, but here, around Ben Nevis, there is a slightly Alpine look. I think it's partly the sight of the mountains over the conifers, and partly the mountain resort feel of Glen Nevis which is full of holiday homes and campsites. The mountain itself made an appearance after spending most of the day under a cap of cloud.

The end of the walk is a bit of an anti-climax. People who saw each other every day for a week now end up suddenly spread across a wide area around Fort William. We all knew it was going to happen and managed to more or less take photos of each other and say goodbye during today's walk. When we got to the bottom we had to walk along the boring road past our B&B to the self-proclaimed end of the walk sign where we wanted to take a photo, then haul ourselves painfully back. We had plan to celebrate the end of the walk with a whisky, but we got caught out eating in this restaurant which resembled a cafeteria, because it was really too late for Antonia to eat in the bar. It was completely the wrong ambience for celebratory whiskies, so we've put it off till we don't know when... The food was OK at least. Probably the last large meal we can allow ourselves! I must say, I'm going to miss being able to eat Snickers bars every day with impunity, but I don't care if I never see another chip or piece of garlic bread! 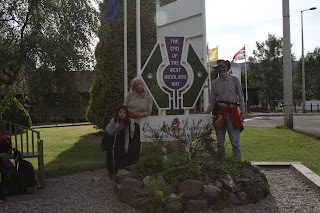