Antonia wanted to tell us what she remembers about India, when she was aged 5-6: 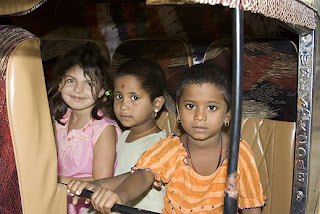 I had my birthday in India and for my birthday cake I had a giant crepe with petunias on it. It was filled with chocolate. Yum! It was a very yummy birthday cake. I went to my Uncle and Aunty's wedding afterwards. People popped my balloons, so I was a tiny bit annoyed.

I remember in India I had a big laugh because this guy was introducing himself and his friends nicely. When he got to one of them he said 'Badmash' and of course it means 'rascal' in Indian and now, whenever Mummy is being bad, I call her a 'bad-mash'.

In India, Little Rabbit was with me. I had a very nice time in India. 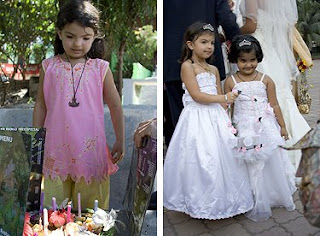 Antonia's birthday party, and the wedding celebration.
______________________
Today, that's what she remembers, which is perhaps what really counts. At the time I was watching as only a mother would. I still remember how her experience of India developed.

I think I always knew India might not be easy for Antonia, but it really hit me when we went to Paris for a two-day trip, to pick up our visas. Antonia found Paris noisy, smelly and over-crowded, and was more or less in shock after taking the metro! She was used to a peaceful mountain home. Still she was looking forward to the trip, and conscious of her status as a world-traveller amongst her friends.

For the first three days in India, Antonia didn't say much. In that time, she had walked, rickshawed and taxied around a steamy Mumbai, got used to taking bucket showers in Indian hotels, picked out a bridesmaid's dress with her aunt and uncle, also picked out a kid's movie she absolutely had to see, taken a 17-hour train ride and watched us negotiate a 3-hour taxi drive with a group of people who shared no common language with us.

Now, she was bouncing over the potholes in the back of the taxi, with no seatbelt (let alone a car seat), and with hot dusty wind as air-conditioning. I was holding tight to her because at this stage, she had no idea how to adapt to the bumps and would have banged her head on the roof of the car three times a minute. It was then that she spoke, or rather yelled "Well, I have to say, India is quite a big surprise!" 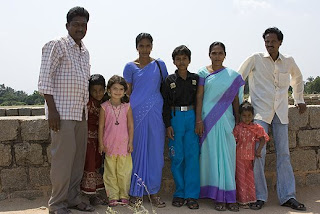 One of many, many, group photoshoots for Antonia
It became a bigger surprise when she realised that everybody, at least all the Indian tourists visiting the same sites as ourselves, wanted to ask her name, class at school, country, could they have a photo with her, and worst of all, pinch her cheeks. That's what Indians do to cute little children, and I'm afraid she didn't like it one bit. We felt that we were somehow representing our countries to people who perhaps rarely travelled abroad, that we were in their country and in a sense, their guests, and that we should be as polite and friendly as possible. Of course, European children are a particular curiosity. She understood all this perfectly and was invariably gracious - I was proud of her -but so much attention was stressful for her and she was often glad to isolate herself in her drawing book. This turned out to be a very good defense for her. 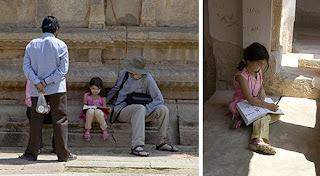 It was in Mandhu that she experienced her turn-around. We rented bicycles - a common choice in this village where the only car is lying on its side in a ditch. From the back of my bike, she had immunity, people could call out to her, but they couldn't get her! "What's your name?", they cried. "Antonia, what's yours?" she yelled back at the top of her voice. "Goodbye!", "Goodbye!". That night, she broke her bread, rice and crisp diet and ate most of my half of a Tandoori chicken we had ordered, leaving me to make do with raita. 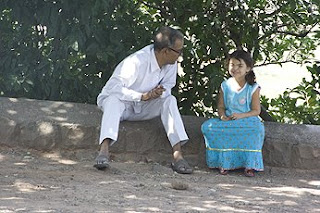 Look how relaxed she is now!
By the time she got to Orchha, she was quite at home, asking the other kids for chocolate practically before they asked her. When we saw a little girl approach her with bracelets for sale, we took no notice, knowing that she had no money anyway. Before we knew it, she had somehow induced the other girl to swap a flower for one of these bracelets!

We did do some kid-oriented things. For her birthday, I had made sure we stayed in a hotel next to a 'theme park'. This was not quite like a theme park in Europe but it had swings and slides and other things. I went out of my way to get hotels with usable pools, and in them, she occasionally found friends to play with. In Indore, I took her to Pizza Hut, though she was so suspicious of Indian sauces by now that she insisted on being served plain pasta. After that, we went to see the film she had wanted, Bal Ganesh. It was in Hindi, but she was already used to watching foreign language films. She loved it then, and loves her dvd of it to this day. We also re-read her children's version of the Ramayana, a story she loves.


On the other hand I don't think it's strictly necessary to do things just for kids. From the very start, Antonia had a special relationship with Hindu and Buddhist sculpture. By the time we got to Kajuraho, she was so entranced by the sculptures (she only saw polite ones! the rude ones are not so obvious!), that she decided she needed to try sculpture herself as soon as she got home. She was ready for home by now. At first, I had planned a rest day for her every three or four days. Now, she was taking naps almost every afternoon. 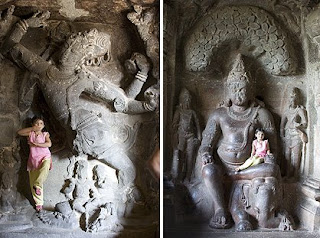 Antonia in the lap of the gods and goddesses of India
at 16:53