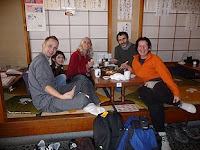 It's a funny thing. When we first learned that we were making a 10-hour stopover in Japan, on our way to New Zealland, we were not thrilled. But the idea started to grow on us. I did research and learned how easy it is to get from Narita (Tokyo) Airport to Narita City, a small town nearby. We decided to avoid Tokyo. Then our stopover was nearly reduced to 3 hours by Travelocity wantonly rebooking our flights without telling us, and Lufthansa being unable to get their computers to work, and we were actually disappointed. Fortunately, things sorted themselves out, as they so often do, and we were on our way to Germany in a nearly empty plane, escorted through Frankfurt Airport at mach speed, and settling down to a sushi starter on a flight to Japan.

We woke up in the morning over some part of Siberia. Below us was a snowy landscape which seemed to be crossed by endless rivers, or maybe branches of one river, meandering across a plain, creating beautiful ox-bow lakes along the way. Soon, over Japan, we saw rugged snow-topped mountains that looked as though nobody lived there at all. I was surprised, Mike having told me how over-populated Japan was. In the distance we recognised Mount Fuji. (Julia later photographed a poster of it in the airport, and kidded Mike on that she had snapped it from the plane!) Finally a flat plain emerged from the clouds. broken into little rectangular fields, grey and brown in the winter, and many areas of yellow mazes against dark green backgrounds. Mike says the Japanese are passionate about golf and these are golf courses seen from the sky (he worked in Japan for a few months so I guess he would know).

Julia and I decided we were quite at home in Japan very quickly. It was a beautiful crisp day and all the infrastructures work pretty much as at home so getting around was easy. The areas we went through on the train reminded me of the south of France, despite the pagoda-ish tendency of the rooves and the thickets of bamboo. We spent the morning walking around the small town of Narita, looking at the interesting foods and the kitsch trinkets. We confined ourselves to eating hot buns stuffed with bean paste and bought one small souvenir each. We had intended to go to the big shrine and park in Narita before lunch but we took so long looking around that we found ourselves with our back against other unavoidable commitments. Just before leaving, we had agreed that Mike's cousin would meet us in the MacDonalds in Narita (it being a recognisable landmark), between 12.00 and 12.30. Mike's cousin is in the US Navy who are decommissioning a ship in Japan. I have no idea why they would be doing such a thing in such a place.

We had sushi for lunch then made a great effort to head for the temple complex in a disciplined way, hardly looking at anything. The complex turned out far larger and more impressive than we had imagined. I suppose that the religion represented is shinto (in retrospect, perhaps it is buddhism, which seems deeply entangled with shinto - I am certainly not experienced enought to tease them apart), but I didn't really understand everything I was seeing. The park contained numerous temples with an architecture that was not completely dissimilar to buddhist architecture of Nepal. Some buildings were more brightly painted than others. There are also administrative buildings and market stalls selling offerings, charms and so on. There are flags, bells and frequently vessels of water with ladles attached. Then there is the park, which is full of very beautiful old trees, of course, but just about everywhere, there are steles of rock of various sizes with inscriptions. We had seen other complexes of these in the morning around the city, and they rather reminded us of cemeteries. Another thing we had seen were little figures, about 40 cm high, roughly carved and sometimes repaired, sometimes dressed in strange little red caps or capes, to which offerings are given. We went to peek inside a shrine from which the sound of drumming was emerging, and it was rather like a Buddhist temple in there. Along the back wall were four of five deities, with a buffet covered in offerings in front of them, pink and yellow sweets in great pyramids. We also saw a procession of priest dressed in striking green costumes with parasols carried by assisstants in black.

As soon as the sun went down, which was early, the temperature became extremely cold and we were glad to get back to our airport and snuggle up on our plane. We had to stop for more steamed buns on the way, and discovered to our horror that each of the three people in front of us in the queue was ordering about 50 each! Mike and Antonia actually fell asleep in the queue while waiting. Fortunately, the local people seem used to jet-lagged refugees from the airport and looked on them with amused tolerance. They crashed again in the departure lounge, Antonia wouldn't even wake up to board and had to be carried on. There was a distinctly New Zealandish feel to our new environment, so our nice Japanese interlude was over, and our real holiday was starting.
at 14:19