After 11 hours in the car, first through a deluge, then throught pale blue skies and blond fields in north-eastern France, we made it to Bruges. On the way, Mike decided to show up at his convention on the 12th, not the 11th, so he is spending an extra night with us in Holland. Of course, we arrived with barely time to visit Bruges, especially after we got our tent set up, but we took the bus in to have dinner anyway, planning to take the night bus back. I'm afraid I'm just getting too old for all this stuff, which is why, when we eventually picked some random cafe to eat in, I suggested walking back instead. I love night walks and we have our umbrellas, right! And if I'm walking, I'm less likely to drop with exhaustion, yes? 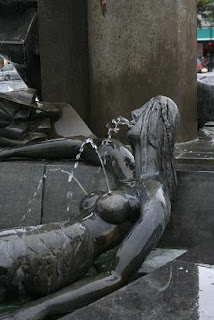 The mermaid of Bruges' fountain by the concert hall 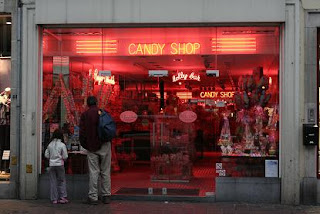 A bit of window shopping 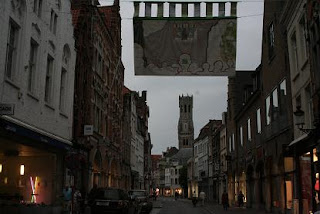 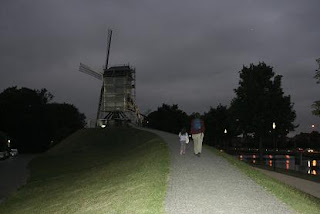 Windmills outside the walls of Bruges
After seeing the sights of Bruges in twilight, we had a couple of km walk down a suburban road, through woods. When we saw the lights of the campsite, Mike said we could take a shortcut. I was dubious, but after we trekked through the very dark woods for a few minutes, he did eventually find a gate to the campsite. We got to bed feeling jet lagged, having been up for nearly 20 hours.
at 04:40