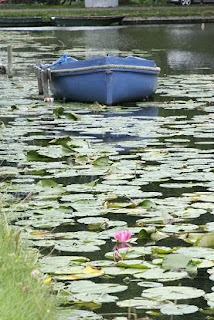 It's only when you start driving from the South of France to North Holland that you realise just how big Europe is, but we made it eventually. We decided to take a tiny detour to Edam, just so we could say that the tourist coaches groups don't see anything which we haven't. It is surely a cute village, with some obligatory cheese shops. We decided that possibly the local supermarket might have cheaper but otherwise equivalent cheese. Probably the most 'typical' thing we saw was a boat navigating through a series of small drawbridges that have to be lifted by hand. Mike asked the guy doing the lifting how he knew when a boat was arriving. He said he just keeps his eyes open, and he gets from bridge to bridge by bicycle. That seemed to explain some of the evident frustration of the lady on the boat. 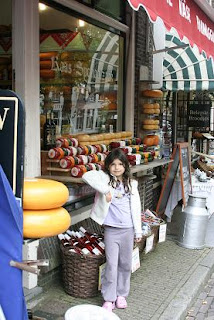 Holland is as flat and full of water ways as advertised, rather strange for us mountain people! It is lucky for us that there is a windfarm near our campsite, as it acts as a kind of landmark. When we got into Hoorn, we discovered they had a funfair, with what is apparently the second-largest ferris wheel in Europe. I should think it is the highest point in the country at the moment, so of course we went up to catch the view.

After that, there was just time for beer ... and tapas. Having observed our neighbours in the cafe in Bruges last night, I had decided that tapas was the way to go in this part of the world. I think I was right! The tapas don't particularly imitate the Spanish variety, they're just a convenient description for small plates of interesting food - we had grilled mussels and jalapenos with guacamole. Otherwise, the menus around here rather tend to the 'stodge and grease' school of cooking. I don't think the French side of me can really accept that chips ('French' fries) are a proper substitute for bread! 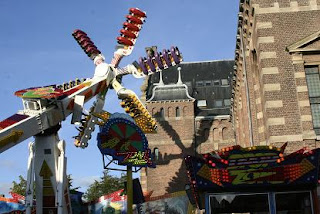 We spent a lovely half hour of the evening watching a heron fish from the canal passing through our campsite. It stood on the bank, leaning over the water, tense and focused. Then it would pounce and flounder back out clumsily with a tiny streak of silver in its beak. It's the quietest time we've had in two days.
at 04:43