I am in the process of transferring travel stuff from my old travel site to this blog. This is the trip where I got culture shock in the USA. Hope it doesn't make too many Americans laugh at me too much!
___________________________
This was our final and possibly most interesting day visiting the city of New Orleans. We began the morning with coffee and beignets at a cafe where we were to meet a group for a walking tour of the French Quarter and cemeteries. These so called 'French' beignets are very similar to something sold in France, with the exception that they are about 20 times bigger, and one feeds a family of four easily. On the other hand, several cups of American coffee are needed to wash them down. By the time I finished, I was ready for a walk!

Our guide was a Cajun girl who did actually speak French fluently, owing to the fact that her husband was French and she was very funny and interesting. She told us many things about life in the French Quarter in the old days. As an example of the 'good life' for which the city is famous, we saw the 'flats' for young men attached to the houses. The purpose of these was to allow them to entertain ladies at will before they eventually settled down into marriage. Stories about the problems with disease and flooding and the high death rate led us naturally to the cemetery. Early attempts at burying the dead had resulted in them being 'dug back up' by the river, fueling stories of corpses floating down the streets. This led to the practice of above ground burial, though it must be said that New Orleans cemeteries are mostly different from French ones in virtue of their overcrowding and poor upkeep. Death was such a common occurrence that it was hard to find adequate space for all the corpses. Poorer people got shoved into a pigeon hole in the wall where, due to the heat, they decomposed very quickly. Only a short time later their bones would be pushed back to make room for another corpse. On one occasion, the wall collapsed and all the bones tumbled out into the street. 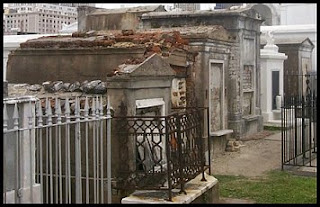 Our walk finished with a visit to Miss Miriam, a voodoo priestess. After she said a few words to us, we visited her church in which objects from all religions were gathered together in great profusion.

In the afternoon, I was not ready to stop walking and thought we would visit the city park. This involved walking down a long main street lined with old and beautiful buildings. True, it was in the part of the city we had been warned away from but we just made an effort not to look like tourists and went. When we reached the park we realised for the first time that it was Easter Sunday. The side of the park we had arrived at was filled with people having celebratory barbecues and picnics. Many of them had hired inflatable castles for the children, and were using boom boxes for music. Michael thought many of them were church groups. The strange thing was that 99% or more of the people there were black. When we eventually reached the shores of Lake Pontchartrain we discovered that people were holding picnics there too and 85% of them were white. There seemed to be some strange kind of unofficial apartheid going on. The favourite type of car among the black party-goers was the four-wheel drive truck, whereas the white people at the lake preferred small sporty-looking cars (?!)

After we got through the crowds of picnickers in the park, I had to deal with my worst culture shock of the whole trip. The park was utterly deserted from here on, and in addition it did not have any paths in it, only roads. The roads didn't even have pavements for walkers. Clearly this park was not intended for walking in and I had never imagined such a thing. The roads took huge detours around waterways and we ended up having to walk twice as far as expected. The only souls we saw were the occasional policemen cruising past in their cars and the feeling began to grow on me that I was where I shouldn't be and might at any moment be arrested for loitering. Suddenly out of the blue, we came on a peculiar sight. A highway ran over the park on stilts, and right under it were arranged some white concrete picnic tables and chairs. Nobody was using them, needless to say. It would have been a very strange place for a picnic. 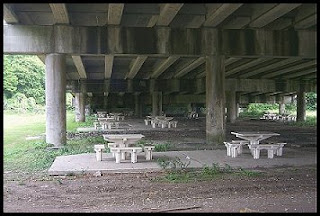 After we left the park, we walked along a long levee by the side of a canal. On either side of this was an area Mike told me was posh, though it was a bit hard for me to tell the difference. At the end of the levee was the lake with the white people's Easter parties I mentioned earlier. At the end of this walk, we came upon a restaurant overlooking the lake. This was one of those picturesque but appalling types of restaurants where you spend your time admiring the strange objects such as plastic sharks hanging from the ceiling and try to avoid tasting the food. Perhaps it was not a coincidence that this was also the only place where we had too much food and we spent the next two days eating it for our lunches.

By now it was nighttime and we were exhausted. There was no question of our walking back, so we had to ask the restaurant to call a taxi for us. Mike had a nice time on the drive home, letting the taxi driver know how crazy we were and how far we had walked.
at 19:23