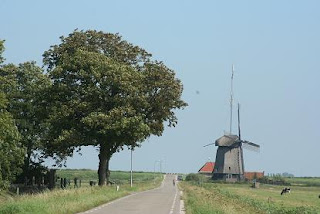 I wanted to see some old-fashioned Dutch windmills without the bother of going to a big museum like the Zaanse Schans. Although I have the best memories of the Zeiderzee museum, I just didn't feel I had the energy for another big day like that. So I just picked a place on the map that had lots of windmill icons drawn on it - it turned out to be the village of Schermerhorn - and went there. We wandered around for a while photographing windmills, and disovered that one was a small, and pleasantly inexpensive museum. When we got in, we found that this was the kind of windmill that pumps water by turning an Archimedes screw. Just what I had wanted to see! The lower floor of the windmill was also done up with old Dutch furnishings: cupboard beds and stoves of the kind we saw at Zeiderzee. 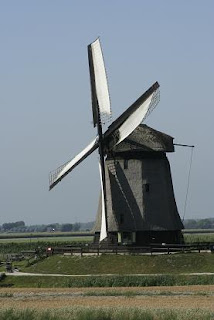 What was great about this little museum was that there were hardly any barriers to stop you getting really close to things. When they didn't want you to touch parts of the machinery, they put up a sign with a skull and crossbones instead! It seemed quite dangerous enough without that warning. At first I wondered why people only lived in the lower room of the tower. As the wind picked up speed and the whole structure started shaking and creaking, I had my answer. The machinery itself was so close and so simple that even Antonia, who is not very mechanically minded, was interested in examining it and figured out how it works. As we arrived late, we got to watch the guy put the mill away for the night. We learned that the big brake lever we had observed at the very top of the mill is operated from a rope hanging down outside the mill all the way to the ground. As each sail reached the ground, he stopped the mill, fastened the sheet up, then started the mill for another quarter turn. 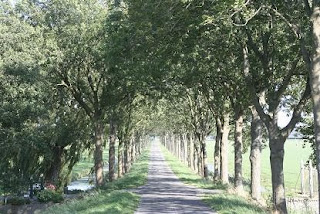 We drove away along extremely narrow roads on the tops of dikes through the north of the ancient Beemster poulder area.
at 06:48