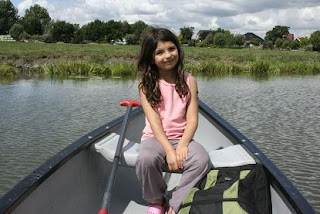 We finally got a nice day and got hold of the canoes rented out by our campsite. The actual campsite looks a bit like a Little Venice, and backs onto a recreational wood. Very pretty, but we got the biggest thrills out of navigating under the main railway to Amsterdam and the A7 motorway, around the base of a modern electricity-producing windmill, and through the village of Berkhout. Also, the water is filled with many objects of great interest, such as several kinds of flowers, an enormous dead fish, a bloated dead water rat, and boats of varying shapes and conditions.

We tried to make a loop back round to the windmills, but found ourselves in a dead end canal - with a pub at the end of it. We tied up our boat using Antonia's shirt, since they hadn't provided us with a rope. 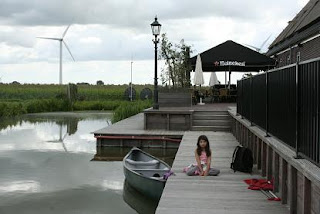 After an ice cream and a glass of white wine, we set off on the long paddle back round to the campsite, fortunately traveling mainly downwind. I had no idea a canoe could be pushed around by the wind so much, especially at canal intersections. Antonia has never done any canoeing before, so at first her strokes didn't achieve much, but after five hours, she was really very good at it. She worked in bursts, but she was effective help, especially against a crosswind. I was grateful for this - I don't know how many kilometres we did, but it was a lot, and I was almost too exhausted to stand up all evening.
at 08:04