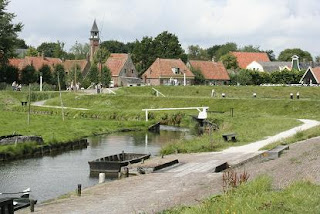 What to do on a rainy day in Holland? Maybe go to an outdoor museum? Fortunately, it didn't rain hard, it only drizzled on an off all day! The Zeiderzee Museum inEnkhuizen is a collection of reconstructed old houses from various parts of Holland, with original landscaping, furnishings and workshops. It's a place for seeing how people used to live and how they carried out traditional crafts. It's a bit on the expensive side (30 Euros for a family + a 5 Euro parking charge), but you know you've got your money's worth when a museum offers far more than you can really take in. Plus, you get to ride there in a boat past the beautiful ships in the harbour of Enkhuizen.

The musuem also has some contemporary art, which we always quite like in our family. Some of it has got a little weather beaten. This poor man was part of a row of 50 mannequins on which a fashion designer had gone to town. They are supposed to evoke the wait for the return of the fishing boats: 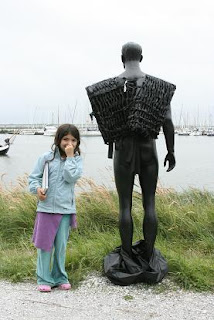 We liked the fibre glass house with sea view, though it had a slightly abandoned feel: 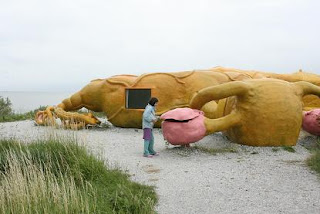 The museum is divided into several villages which give what I call "an impressive impression of industriousness". You get the feeling that the Dutch were always constructing clever gadgets with gears and winches and working hard, so much so that I was feeling quite guilty by the end of the day. The inside of most of the houses was quite small and basic: beds in cupboards and a table and a few chairs in front of the stove. The gardens were filled with rows of cabbages and the meadows with geese or goats. It does seem very convenient to have water all round the fields, as I expect the animals mostly stay where they're put. It seems as though every kind of craft workshop and proto-industrial building you can imagine has been reconstructed, from the sailmaker's to a laundry powered by a steam engine. Although very practical, the museum villages are also very pretty, and in this day and age they have a number of pleasant canal-side cafes as well. 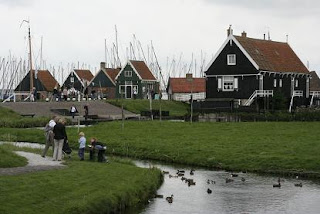 Of the crafts on offer, Antonia was a slightly shy learner of net-making and a very enthusiastic maker of her own rope ('Can we go to the rope-making now? Pleeeaaase? What about now?'): 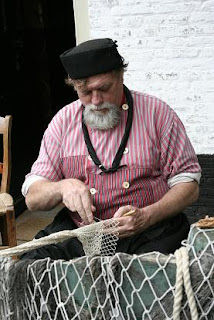 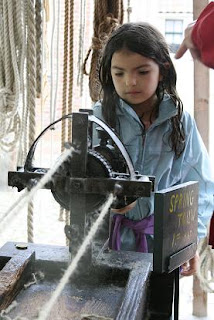 Mike learned what the paddles on the sides of so many of the boats are for. Instead of having a permanent central keel, the boats lower one of these paddles on the side towards the wind. A sailing boat needs a keel to stop it being pushed sideways by the wind. I didn't ask why this system developed, but it may be because a lot of the water here is quite shallow and a permanent keel would be likely to scrape the bottom. 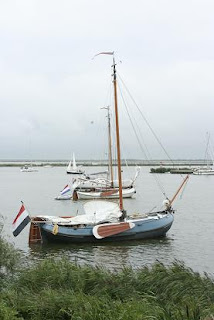 He also ate an eel sandwich and liked it! Meanwhile, I developed a strange aesthetic fascination with hanging fish that I wouldn't eat if you paid me! 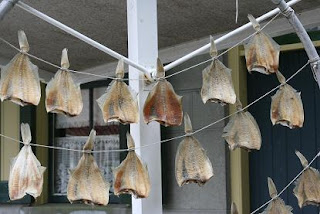 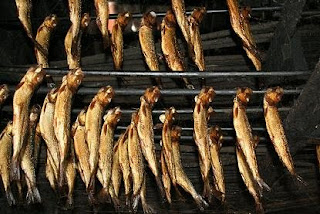