I think we should have set off a bit earlier this morning, because by the time we got to Amsterdam Centraal, Antonia was starving and tire, and when she's starving and tired she's basically a dead weight. I had to quickly decide that the 'hop on hop off canal bus' would solve our problems. Obviously, it costs a bit of money, but that sort of thing has proved an effective means of dealing with big cities and a child before. As it turned out, Antonia found even the loudness of the commentary in the first bus pretty tough. We got off at the first stop, the Anne Frank house, and headed into town, looking for somewhere to eat. Sara's Pancake House seemed like a good bet, since Dutch pancakes were on my list of things for us to try. It has the atmosphere of a greasy spoon, so if the prices are anything to go by, Amsterdam must be pretty expensive. I doubt this is supposed to be an expensive place, since it seems to be patronized by parents with uncontrollable children. There were three individual tantrums whilst we were there. Out of justice to our host country, I have to say that none of them involved Dutch children (or mine).

Feeling slightly refreshed, we decided to walk across town taking silly pictures, catch the canal bus at the other side, then ride around on boats for the rest of the afternoon. I didn't think it was worth attempting any museums with Antonia so tired, and we probably would have been short of time anyway.

The Palace Square - our silly pictures were rather successful 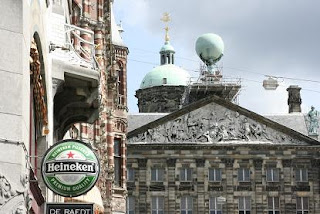 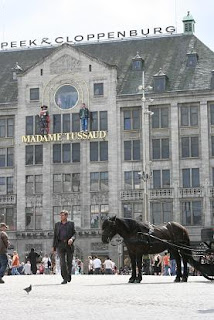 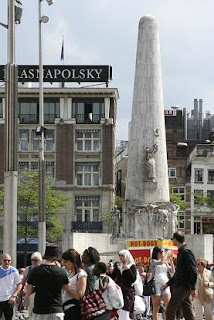 I had been sort of nervous about taking a small kid round Amsterdam, because I didn't really know where the red light district was. I thought I would prefer to avoid it, and the questions that might go with it. Well, I did not succeed in avoiding it, and all I can say is that the capacity of children for ignoring things they feel don't concern them is phenomenal. My kid notices nature and sculpture. Twitching red curtains with lingeried ladies were lost on her, as was the irony of coffee shops stinking of pot, only two buildings away from the police station. I thought she might have noticed the 'Condomerie' with its very decorative novelty condoms ... but no! She walked past all those things. Yet, when we came to the sculpture below, she positively pounced towards it. It is an homage to the 'ladies' of Amsterdam. Needless to say, she has no idea. 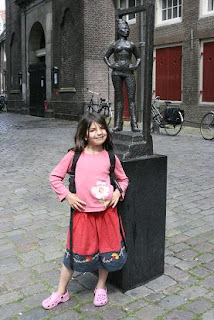 We eventually found our way to the parts of Amsterdam that grandma would reccommend and got back on our boat, not without purchasing a child's size of indispensible yellow fluffy clogs along the way. 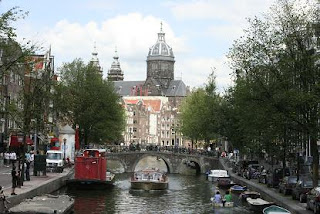 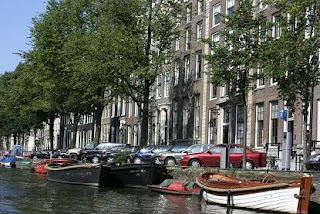 In the end, we were both exhausted, but I felt that I had barely got a feel of Amsterdam. Maybe just enough to know my way around the next time I come.
at 21:02