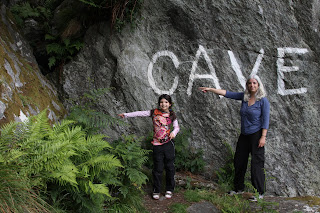 Today we excelled all previous records by spending more time stopped than walking according to the gps. Not that it was particularly hard walking, we just spent a long time hanging around in the pub at lunch time, then looking for Rob Roy's cave, then sitting on beaches. We missed the 'low road' along Loch Lomond, so we ended up with a quick and easy forest track straight into Inversnaid. By lunch time we'd made pretty good time. Our first mistake was stopping for lunch for about two and a half hours. Our second mistake was hanging around looking for Rob Roy's cave! The 3rd quarter of the walk was a bit scrambly, but not nearly as bad as advertised in the book, and the last quarter was easy as well. But it's upsetting to arrive so late, because you don't have time to relax. We're having dinner without getting washed, because we decided to have dinner instead! We're in the Drover's Inn, which is filled with stuffed animals, including a bear. It's also full of our usual crowd of hikers. Mike ordered vegetarian haggis, which tasted almost like the real thing. One of the interesting things about this trip is watching Antonia get outside at least two large meals per day (not counting snacks)! She isn't usually a big eater.

The weather was really fine and still today. It brought the midges out, but they weren't a nuisance if you keep moving (not sure how we managed to avoid them). It's supposed to rain tomorrow and as we climbed up out of Loch Lomond, the sun was misting over, and I could smell rain on the air. I wonder if it will materialise. After walking for a day and a half along Loch Lomond, it felt strange to leave it behind. It's really incredibly picturesque, not just for the views over the lake but for the woodlands as well.
at 18:09