It's been quite a week for patriotic displays in the media, what with the royal wedding in Britain and now the assassination of Bin Laden.  The newspapers show the Americans throwing street parties, on the actual streets you would hardly know it had happened.  Just the Fox building broadcasting its headlines to the outside world, one person offering a non-committal 'Heard the news?', and the State Department emailing Mike a travel warning for the whole planet, suggesting that they, at least, are not sure the world is any safer.

Yesterday, I was complaining about the tone of patriotism at Valley Forge.  Today we decided to concentrate on the Liberty Bell, and of course, we got a whole lot more of it.  This, I think, is where the real damage is done.  The education at the Independence site consists of patriotic propaganda, hero-worship and anecdote.  But have you ever tried to explain the concept of political liberty to a nine-year old?  Or the meaning of the constitution?  It takes a while...  At these sites, people, children especially, are learning that something is very, very important, before they have the maturity to understand what it is.  Then they fixate on the symbols: a flag, a founding father...  The primary sources of the period include some of the more interesting things I've read, yet they completely debunk the almost religious aura that's been created around America's formation. 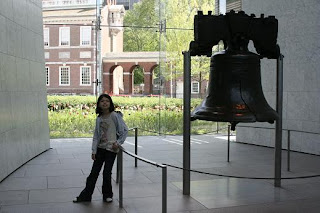 Antonia beside the Liberty Bell, with Independence Hall in the background

Antonia on Liberty (I thought she did well, like I said, it took a while)


People might not feel free because they have to follow the law, but people feel more free if they make the law themselves.  If you are religious, you want to feel free to follow your own beliefs.

The Library
I decided the public library could solve some of our limitations over the number of books we can carry around.  We would drop in and read through a few picture books about William Penn, George Washington.  The first task was to figure out the library's organization.  Children's fiction books are in a separate children's area.  I searched in vain for the non-fiction section until I discovered that children's non-fiction was integrated with adults.  Except for biographies, where there is yet another separate bookcase reserved for children!!  We found a space in the huge Chinese language section of the library, and read picture books about William Penn and the Liberty Bell over each others shoulder.
at 14:01