Today's roadschooling: the declaration of independence 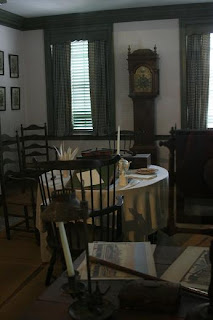 In the library, after we read our picture book, I was looking at a completely unrelated book and learned that Thomas Jefferson had been unhappy with the way his colleagues had edited his declaration, but that he found it so hard to express himself orally, he didn't say anything.  I had been struck by the way the declaration changes style quite radically in at least one place, so it made sense.
at 21:10