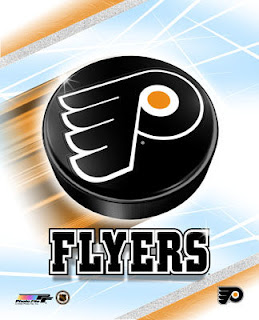 I spent most of the day getting Antonia off for a week with her grandparents.  I didn't even get out until 5.00 pm to have a drink with Mike as he finished work, so I thought I would have nothing to write about.  But actually, any time you go out in a new country interesting things happen to you...

1.  ...such as a truck blocking the road while it unloaded.  Why is that interesting?  Because I have spent 18 years stuck behind trucks with Mike and listening to him say "Only in France".  I made him take a photograph as evidence. 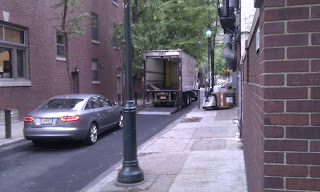 2.  If you want to know where to get Thai take-out food in Philadelphia Center City, there are people wandering the streets in uniform whose job is to tell you. Apparently, Center City residents have to pay extra taxes for this kind of public spending, but it's easy to see how it works as marketing for the businesses here.

3.  If some people overhear you finding out where Thai take-out food is to be had, and they want some too, they come along with you.  It turned out that one of our new companions played ice hockey.  We were on our way to watch the Philadelphia ice hockey team sort out the Bostonians (ha!) at my brother-in-law's, and they were off home to do the same.  The guy we met had toured Europe with an ice hockey team, and since ice hockey is also big in Grenoble, I was interested in his experiences.  He told me that it is a much more aggressive sport here, and that in Europe, he usually ended up with about 30 penalties in the first minute.  It is true that the kids who play ice hockey in Grenoble are much more fascinated with their own skill on the ice than their boxing capabilities.  When I was small in France, I used to watch ice hockey one evening every week while my parents went bowling, so I was looking forward to this new cultural experience.

Unfortunately, the Philadelphia Flyers flew about as well as the dragon in Antonia's latest story!

What a disgrace!  The match only lasted about twenty minutes, because my brother-in-law had pre-recorded it and there were large sections he could not bear to watch.  Although only the goalie was formally sent off, the Flyers didn't seem to have the best offensive game going - apart from the moment where two or three of them decided to down sticks and engage in a longish boxing match with the Bostonians.  Although ice hockey rules include all kinds of technical details I hadn't been aware of, scrapping is perfectly OK in the North American version, and the referees just stand around until the fighters fall on the floor.  After that, they politely encourage them to get back to playing ice hockey.  At least I got my American culture fix!
at 16:27