Days 32 and 33: Paris from Philadelphia

There are two temporary exhibitions that focus on Paris running at the same time in Philadelphia. In fact there seems to be a whole 'French Connections' program going on in Pennsylvania.  Does that mean we're forgiven for saying the Iraq war was a bad idea?? 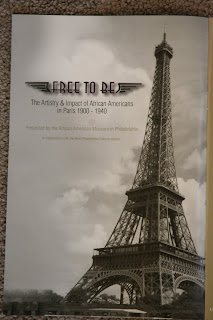 Free to Be is at Philadelphia's African American museum.  It looks at the lives and work of African Americans in Paris in the first half of the 20th century, especially artists, writers and musicians.  One of the major themes of the exhibition is that Paris consistently offered more opportunities to black artists than the US at that time. I remember hearing the same thing about London in connection with Paul Robeson.  It's interesting to compare the importance of African Americans in the European capitals early in the 20th century, compared with the African and West Indian dominated black cultures we have now.

They included Paul Robeson in this exhibition, which I though was stretching it a bit, since his connections with Paris were pretty minimal.  He did tend to get everywhere and his internationalism is one of the reasons why I'm interested in doing some research on him, so I'm not complaining.  They exhibited his costume from Emperor Jones and I think it's the first time I've actually felt moved by a piece of cast off clothing.  I stood there quite a while trying to figure out how tall Paul Robeson was! Next to this was a mink coat belonging to one of the most Parisian African Americans you could possibly get: Josephine Baker.  I had never realized quite how much of a French patriot she became.  That was the showbiz side of the exhibition.  The rest was pretty interesting to as well.  It was curious to see which of the paintings had noticeably French characteristics, either in the subject matter or the style.  I also learned more about W.E.B. Dubois which was cool.  Unfortunately, the program of films and concerts that went with the exhibition was over by the time I got to Philadelphia.

I had a secondary goal at the African American museum which was to look around the permanent exhibits quickly and see if they would be interesting to take Antonia to.  I know I tend to complain about the educational quality of museum exhibits.  Pretty often, I'm afraid they suck!  But wow! the exhibitions here are coherent and interesting. The Conversations one is especially suitable for kids Antonia's age, so I guess we'll be back.  The only thing that could go wrong is the room filling up with 30 children pressing all the buttons at once.

A Window on Paris 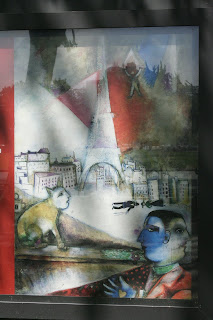 The primary focus of the exhibition was Chagall's career in Paris, and the painting the exhibition was named for was a beautiful centerpiece.  There were some other excellent Chagall paintings and several etchings.  There were also a lot of works by other expatriates in Paris, especially Russians or East European Jews.  There was a whole room on the set and costume designs for the Ballet Russe.  The quality of the paintings and sculptures is very high.  It's basically a visual experience.

The most interesting of the Perelman Building's other exhibitions was The Peacock Male, a collection of the most flamboyant male clothing they could find.

In which I get in to Philadelphian life
I wanted to read Burning Lights by Bella Chagall for my research and tracked it down to the Central branch of the Free Library, in the Art Reference Department.  For the first time in my life, I had to wait for 20 minutes while they fished the book I want out of the bookstacks.  Then I nearly fainted when I saw how thick it was because I had to read it right there.  Fortunately, Bella had originally written it in Yiddish, which was really a childhood language for her, so even the translation reads pretty fast.  I got through it in two and a half hours.


I've also found a gym that'll work for me at least until I get to LA and I've figured out where to get fresh bread.  That's a luxury item in the US, and boy, does it cost money!  And I've wandered through the streets of the Old City on Friday night.  It's not as 'rough' as Britain but there's plenty of people around.  Most of them seem to be wandering in and out of art galleries wearing black mini-dresses in the rain.
at 13:38