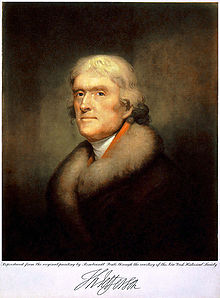 Of all the people we studied, Thomas Jefferson is Antonia's favorite.
For writing what she refers to as The List of Complaints !
I thought it would be fun to talk about some of the things Antonia's been working on in our roadschooling.  I especially like it when we found ourselves working on a unit study without even knowing we were going to.  In the last few weeks we've learned a lot about the study of people.  I think that's partly because the US lends itself to that subject.  When you see how much they are into biographies and famous people and searching for heroes and mentors is when you realise they're not kidding about the whole individualism thing!  They do it a lot more than us anyway.  So here's what we have done:
What I liked about this project was that apart from learning a lot of facts about individual people and times we developed techniques for studying history.
at 18:12