There are two main reasons to visit Valley Forge near Philadelphia.  The first is to get out of the city into a more natural environment.  The second is to have a look at the winter campground of George Washington and his army.  It is not absolutely perfect for either of those purposes in our experience.

1. Getting there and back from Philadelphia can be a bit of a struggle.  There was a lot of traffic, roadworks and poor signposting when we went.  This was made worse in our case by the fact that we had to get hold of a car before setting off, and return it afterwards. We did not make it to a trail head until after noon.  Then of course we had to have lunch.  We had time to stroll around for 3 hours, after which we fought our way home.  Valley Forge is NOT worth 3 hours of walking for 8 hours of miscellaneous messing around. There is a public transport bus between Philly and Valley Forge which may be a much better option. 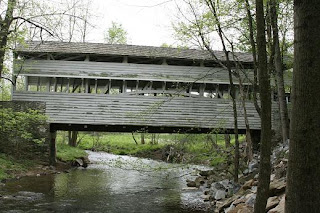 Covered bridges are supposed to keep the ice off the roads

2. As contact with nature goes, it isn't a perfect place. Valley Forge is pretty to drive through with open fields and woodland and a few reconstructed log cabins at strategic spots.  But, we quickly realized that the trail around the park, which we would have liked to have walked, runs along the busy road for miles and miles. We just weren't ready for that much noise.  We checked the map more carefully, found a trail at the other end of the park and went back to get our car.  We got on the Horseshoe Trail which goes on for miles and miles until it joins the Appalachian trail.  Very soon we found we were leaving the park, and entering what Mike calls suburbia.  Homes that look like enormous plastic dolls' houses are dropped at random in the woods, like so many witch's mansions, assuming that  Barbie would be playing the witch.  The fences that delimit their property boundaries hem the trail in on both sides. I am allergic to this type of environment and Mike said it might go on for 30 miles or more, so we turned back into the park. 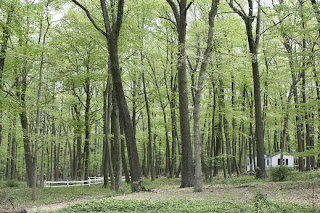 This cottage and vestigial white picket fence are in the back yard of a house ten times the size!


Valley Forge is a tiny oasis in a wasteland, well, sort of.  The woods here feel surprisingly barren as there is much less undergrowth than in deciduous woods in Europe.  We are just learning to recognize poison ivy, the Super Nettle, and there is a lot of it.  We stopped for a while to admire the bluebirds and listen to woodpeckers, before descending Mount Misery at the point where a covered bridge crosses the road.  If I was already feeling 'poisoned' by the whole ambiance of the place, it was to be Mike's turn. All along the creek are big signs warning fishermen not to eat anything they catch as the water is polluted.  Polluted water rightly freaks him out.  It did not seem to be deterring the fishermen, one of whom pointed out a mass of half a dozen snakes lying on an exposed branch.  He told us they are common and often drop on him out of trees as he pushes through the narrower parts of the creek. 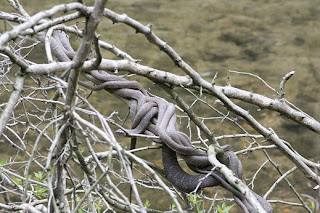 Truly, Valley Forge is the sort of place where witch and ghost stories are made. I wasn't sorry to return to the more wholesome urban mess of Philadelphia.

3. As 'history' goes, this is probably more of a patriotic ritual.  Still perhaps that's your thing!  Valley Forge was the winter campground of George Washington and his army, now a National Park.  I suspect there is very little to see in the way of actual remains, but there are reconstructions, statues and memorials, park rangers in costume and other miscellaneous stuff scattered around a 5 mile circuit.  It feels a bit like the Stations of the Cross! Eventually we reached some real buildings, one of which was rented by George Washington as his winter headquarters.  It has been filled with period furniture, uniforms and plastic food in the kitchen, so in fact, it is also very much a reconstruction. The tone of American patriotism in use at these sites is starting to really grate on my nerves, and I'm saving my patience for the Independence park in Philadelphia.  Its effect on Mike is electrifying, though.  Suddenly he is using the pronoun 'we' to discuss the War of Independence with his daughter (who is half English, and who's first ancestor to live in America was in about 1903)!!  Fortunately, the information in the Visitor's Center is quite well laid out and thoughtful, but I often feel that this kind of information can be obtained just as well from a book. 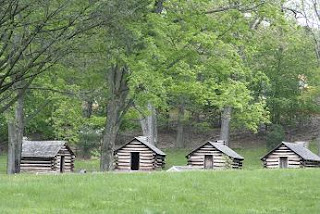