Tomorrow, we are carrying out our long term goal of visiting the Eden Project.  For today, we found that there are other nice things to do in the area, especially on a beautiful day.  The seaside town of Mevagissey, the coastal path leading to beaches and rock pools, the hikes and the Lost Gardens of Heligan which we should really have got to earlier. 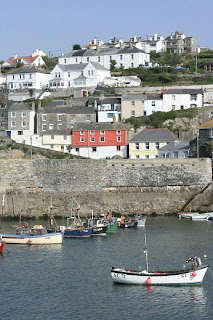 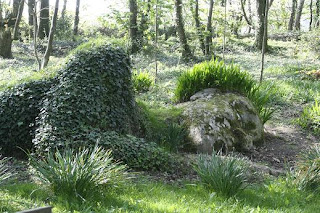 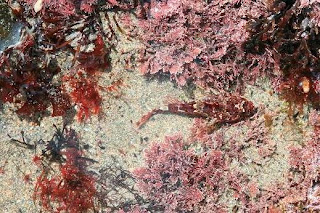 Le poisson d'Antonia qui lui a mordu le doigt !
I was looking in the rock pools with Mummy.  We first started looking in rock pools because I wanted to show Mummy a gigantic-mega-sea-anemone. Afterwards, we went into more rock pools and I was looking to see if I could find a crab or maybe even a starfish, but instead, something bit my thumb. I parted the seaweed to see what it was and it was a fish!  It was a beautiful red and white fish and I showed it to my grandparents who were there, and I was very happy.  A bit later, we found some people who asked us if we found anything and we said yes, and they showed us their starfish and we tried to show them our fish, but we couldn't find it.

Preview of America
As we were climbing up towards the Lost Gardens of Heligan we met an American lady who was trying to cycle to St Austell.  She lived in Philadelphia, and had a job as a stewardess on a private jet plane, belonging to somebody who she told us was very well known - but she made a point of not telling us whom.  A few days later another American did something very similar to us.  I have come to the conclusion that Americans have decided that name-dropping is a little bit gauche, but they still can't resist letting you know that there are names to be dropped!

The cycling lady also asked us if it was safe for her to cycle alone along English country lanes in the middle of the day.  It's hard not to fit that in to a pattern of Culture of Fear - or genuine widespread insecurity in the US?
at 22:08