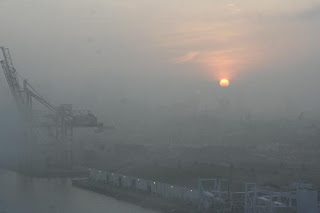 Brooklyn terminal, there are some skyscrapers back there somewhere!
The 'Arrival in New York by Ship' is iconic: the statue of liberty, the Manhattan skyline...  so I love the fact that the specific instance of an arrival in New York can be so completely different.  At about 5:30 am we passed under the Verazzano Narrows bridge, in the dark, but at least we could see its lights.  After that we entered a thick fog, through which the sun eventually rose over a few hulking shapes.  We didn't see much else until it finished burning the fog off, as we had breakfast.

Arriving in the USA

The borders of the USA are relatively tense places these days.  It's heart-warming how much the New Yorkers love their city.  At 5.00am, they were on deck looking starry-eyed, and pointing out landmarks that were completely invisible through the fog.  That's how well they know their skyline!  It's a bit disconcerting though, when they tell you that the two pilot boats shepherding the Queen Mary are there to protect us from Al Qaida.  I swear, we had two very similar boats at Southampton and they were there to protect us from other boats whose navigators were too distracted or incompetent to get out of our way. Or maybe, given the Queen Mary's size, it's the other boats they're protecting.
Disembarkation should be a big moment for us.  We're following in the footsteps of Mike's great-grandparents, the first Americans in his family.  We're also reliving his own return to the US by ship at the age of 4, after his father had worked in the UK.  In reality, we're feeling calm and collected, though a bit sad at leaving cabin 8057 which had felt like home.  In the ship's theater, which doubles as a disembarkation lounge, Mike got chatting to a guy I had seen wandering the ship in a tracksuit marked SEALS (the American Navy).  This two-star general, as he turned out to be, told Mike that his job involved keeping the US on top in the European 'theater', where they sometimes just do what they have to do..., that Mike shouldn't believe anything he sees in the media (I presume none of us do anyway), and that there's a whole lot more going on than he could possibly know about.  There are many interpretations to this.  The kindest is that a little harmless bragging at the end of a holiday is good for the ego - but did you know, Mr 2-star general, that you were addressing a dual citizen of the 'European theater' as well as the US?
I had feared that immigration might be an obstacle for us, as we tried to convince them that I should be granted entry for 6 months and 4 days, rather than the standard 6 months.  I needed the extra days to be able to meet our transpacific ship in San Diego.  They turned out to be pretty nice about it, but they couldn't deal with it in the ordinary queue, and we were sent to the office for troublesome cases.

We waited next to some French contractors who were supposed to spend a month on the Queen Mary.  They weren't quite sure why they had just disembarked or why immigration were concerned about letting them re-embark!  Their English was OK but not quite up to the task and the immigration officials' French was non-existent, so I interpreted for them a little bit.  That got the attention of the immigration officials, and they decided to fast-track me out of their system.  They gave me seven months in the US, just in case the transpacific ship doesn't leave on time! I tend to feel that I get some preferential treatment from being married to a US citizen.  While it's nice for me, the only excuse is that my marriage really does give me the right to live in the US if I want to.  And I helped them out a bit.  But I couldn't quite avoid the impression that they don't want too much fraternization between the troublesome cases, or too many US citizens hanging around taking note of what goes on in there.  The staff in the center are rather brusque, though helpful to me, but right there in the corridor between the front desk and the waiting room is a big world map showing 'Zones of Terrorist Activity', and most of it is red!
at 20:11