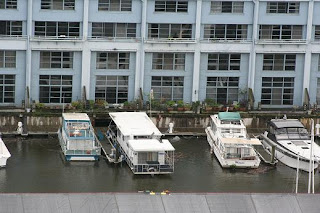 Our houseboat is the kind that's like an ordinary but tiny house built on a raft.  It is possible to move it around in the water, but it isn't really for going anywhere.

This advantage of this type of houseboat as living accommodation is that you get a lot more width.  Inside it's much more like an ordinary house than a barge.  You know you're on a boat because it rocks up and down, more or less noticeably, depending on the weather and on what is going on outside.  The disadvantage with this king of houseboat is that not as much attention has been paid to designing the space. Although it must be more than twice the size of our Queen Mary cabin, there is less room for our stuff!  Anyway, we have a fairly large sitting room / kitchen then a few steps to a lower level where there is a bedroom, a tiny shower room and a couple of closets. The great thing is that we have a lot of outdoor space: two deckchairs on the roof where I'm typing this, and a big covered deck with table, chairs and grill at the front.  We are much better off in this respect than we would be almost anywhere else in Philly, and I really need to be able to be outside.

If they have energy efficiency ratings in the US, the houseboat would surely score a G.  Even when you're inside, you're as good as outside, except for wind and rain protection. When we arrived, it was unusually hot and muggy for the season and we had several storms. Since the AC hadn't been installed for the summer, it was equally hot and humid inside. The lower levels of the boat seem to be at or below water level, which is perhaps a bad design move.  At any rate they are quite a bit damper in feel than the upper level.

I hate AC and welcomed the immersion in the local climate.  This is not something I've had the chance to do in the US before, and it's one of the things that has always stopped me feeling 'in touch' with the place.  Mike was looking forward to the AC.  Anyway, it's now cool and dry and we had to turn on the heating last night!

How the utilities work:

Along the docks floating boardwalks are stands shared between two moorings, supplying electricity and water.  The cooker and grill use gas bottles, there are gas and electric heaters.  The bathroom facilities are interesting.  Flushing the marine toilet is a two step process.  Turn the handle one way and you pump water from the marina into the bowl.  If the tide is very low, and the boat is sitting in sludge, you can either wait, fill the toilet from the shower, or go use the toilets in the marina building.  Turn the handle the other way and the toilet flushes into some kind of waste grinder.  Legally, it then has to go to a storage tank (to be emptied regularly?), or it might just get away with some kind of onboard treatment plant, which our boat doesn't have.

It seems we have a small onboard hot water tank, heated electrically, though I have not found it.  It has the capacity for a couple of small shower though it hasn't run out on us yet.  The shower needs a pump, though this seems to be mostly for getting water out of the drain rather than into the shower head.  At any rate, if it is not on, the water collects in the bottom of the shower.

The marina building has laundry facilities, a shower and two toilets.  Not everybody has bathroom facilities on their boats.  I wonder if using these facilities isn't in any case the most ecologically friendly choice.
at 16:12