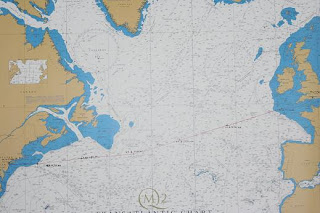 Antonia plotted our course on the souvenir transatlantic chart, using figures issued at the end of the voyage.  That's not the end of the use of the chart for our roadschooling though.

Tuesday 19 April, 2011
We’re pleased and surprised that all our stuff fits so neatly into our stateroom.  We like our huge window and balcony and the way the sofa bed for Antonia folds up so nicely and easily during the day.  We got upgraded to this lovely room from what I like to think of as ‘the broom cupboard’, mostly by booking early.

Wednesday 20 April, 2011
What's fabulous about being on this ship is that the telephone doesn't ring.  And they offer activities for children for 10 hours out of every day.  Antonia chooses what she wants to do to from her own program sheet.  There are too many choices.  Today we saw a couple of other ships out at sea, and a lonely seagull flying in our wake.

Thursday 21 April, 2011
Everything is in motion at sea, there are no fixed and stable points.  Early in the morning, when we were moving a lot, I decided to take the background hum in our room as a fixed point.  Just then, the hum began to change pitch and volume.  It was nice, it made me feel very centered, though in reality, even my stomach is moving up and down.  No seasickness yet, though I started to wonder a bit during the roughest part of the morning.  We learned that we are perhaps fortunate in being midway along the ship where the motion is least.  The gym is in the bow, and the pitching adds to the challenge of balancing on the cardio machines or choosing weights.

There is something bland about life on the ship, without ever being boring.  The ocean is odorless, and without a living thing to be seen.  The food is excellent, but in a bland kind of way, and the design of the spaces is stunning but has no natural materials.  I’m not saying all this as a bad thing, really.  It makes space for inspiration and energy for work, helped of course, by the fact that we have literally nothing to do in the way of preparing food or cleaning, and precious little laundry and tidying .  I think the blandness also makes us more focused on the people around us, certainly it would on a longer voyage, where we had more time to get to know them.

Friday 22 April, 2011
We have developed a bit of a routine.  After a buffet breakfast, we go to lectures or activities or I do a few lessons with Antonia.  We prefer the restaurant lunch to the cafeteria, and we usually get a nice window seat.  In the afternoon, Antonia goes to the children’s area for three hours of play and activities and Mike and I work in our stateroom.  When Antonia comes back, I go to the gym and Mike takes her to the pool.  Sometimes I join them in the hot tub.  We have the late dinner at 8.30 pm so there is plenty of time for all this and dressing up, which we do nearly every night.  After dinner, we go to shows or the cinema sometimes, but mostly just to bed.

Sunday 24 April, 2011
Today, the wind is really whistling outside our stateroom and it’s raining, but the sea is astonishingly calm.  Earlier in the voyage, the motion was quite noticeable, but the weather seemed fine and not particularly windy.  Obviously the link between wind, weather and waves is not a totally direct one.  This ship is mostly full of people who have cruised a lot more than us - this is our 'maiden voyage'.  Many of them have remarked on the earlier motion, which after all, we found quite moderate.  None of us apparently get seasick on a big ocean liner with stabilizers in calm to moderate seas, but Mike looks at the Atlantic outside and speculates about what it must be like in a small ship.  It certainly is a featureless desert and I’m vaguely aware that the weather has left few possibilities for traditional navigation.  Without a gps, I’m not sure what the navigator would do.

We liked cruising a lot, we may do it a lot more, and I’m really looking forward to our Pacific crossing, but now the novelty has worn off we are thinking about issues and responsibilities.  We have encountered and overcome the temptation to waste food or not clean up messes just because the food is free and there are lots of staff.  So far, so good.  We‘ve asked ourselves about the ecological viability of this way of life and travel, compared with others.  We don’t have enough information to answer those questions.

In other news, Antonia has far more racial awareness than I ever had at her age, which is presumably related to the fact that she's been in many and diverse multi-racial environments in her short life.  She has noticed that 'all' the passengers are white and 'all' the staff are not.  She said it made her feel ‘a bit strange’.  To a first approximation, her observation is true.  It perhaps isn’t surprising that the majority of passengers on a liner between the UK and the US are white, but still...  In fact, a great many of the staff are Filipino, and I wonder why.  Of course, there are other differences.  Unsurprisingly, the passengers are predominantly past retirement age, the staff predominantly young.  But still...

I have been asking myself, what needs to be the case so that this situation, however ‘strange’ is nevertheless acceptable.  Mike was obviously trying to answer the same question: he began asking the staff who work with us about their job satisfaction!  I’m not sure if I feel certain of an honest answer from that source.  We really know no more about their pay and conditions than we do about the ecological viability of the ship - though we can see that they work long hours, indeed, long weeks.  It’s clear that our fellow passengers are equally uncertain about their situation, from those who tend to assume the service staff are basically reliant on tips for their income (as in their home country), to those who assume that tips are a mere extra (as in their home country).  None, as far as I know, spoke from specific knowledge.

For myself, I feel the situation is only really acceptable if our roles are interchangeable, at least in principle.  It would have to be possible to imagine our daughter waiting on our retired head waiter as he takes a nostalgic cruise around the South China Seas.  And it would have to seem like just as good a job to her as it is for him.  Whether that’s the case, I don’t know...  I also feel that Carnaval, the company that owns Cunard, is of course answerable for matters of environmental protection and employment, and that information, if requested, should be forthcoming.

Monday 25 April, 2011
We woke up to the intermittent sound of our ship’s foghorn, bellowing into total whiteout like a whale.  It’s our last day today.  We did an unusual number of activities, out of the feeling that it was our last chance, and packed.  It’s amazing how quickly you can get used to a place.  I am glad we’re going to a houseboat because otherwise, I don’t think I would be ready to welcome the return to dry land.
at 21:39