Day 27: The Quest for the SS United States

The SS United States is a ship that Mike took between Britain and the US when he was four years old.  Its empty hulk is waiting to the south of us in Pier 82 for somebody to decide they can afford to do something with it.  Even from here, we can see its monumental smoke stacks and our goal today is to go and have a look at it. 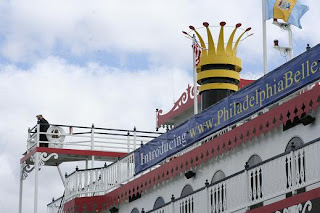 The Philadelphia Belle being steered off for a cruise
1. The first part of the route takes us through Penn's Landing full of beautiful old ships: the tug boat, Jupiter, the cod fisher, Gazela, the SS Olympia, the restaurant,  and one submarine, Becuna.  The seaport museum is also here: we will visit that when we have a full day.  Jupiter and Gazela are being restored by volunteers, Jupiter is moored alongside a floating workshop and Gazela is always full of people who will get the chance to sail her eventually.  There is also the Philadelphia Belle, which is pretending to be a paddle steamer and taking people on mealtime cruises.  It's vestigial paddles don't even touch the water, but we can all tell just by looking that they would be no use if they did. 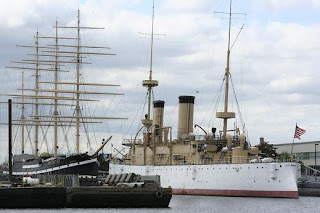 The Olympia (right) is a museum boat, the Moshulu (left) is now a restaurant
2. The bike trail along South Columbus Boulevard hugs the water, taking us past a new apartment block built in imitation of a cruise liner, a heliport (that explains all those helicopters) and the beautiful piers 39 and 40.  They must be contemporary with ours, but they are even prettier to look at.  They are used for storage and warehousing of various kinds.

3. After the coastguard's office, the bike trail splits away from the road and dives off into a kind of wilderness along the water edge.  A brand new section passes through a new but barren garden that is supposed to filter runoff from rain.  It comes to an abrupt halt at what looks like a property boundary, but we pick it up again on the other side of an abandoned car park. Mike told me that when he lived in DC, he was part of a committee for creating bike trails and it was a nightmare negotiating his way through all the bits of private land.  It looks like something similar happened here. 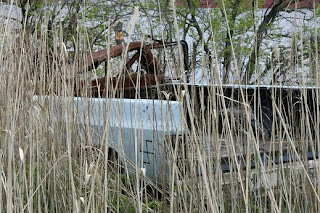 Abandoned car on overgrown pier
Nature is reclaiming territory here.  Antonia and I saw our first American robins, and there are many other birds I don't recognise.  In the thin woods, two Asian ladies were collecting a plant that looks like our silver weed.  They said it was used in Chinese medicine.  The piers are abandoned, either just posts sticking up out of the water, or overgrown rectangles of woodland.  We followed a path onto one of them, letting Mike go first as he is the only one who can recognise poison ivy and poison oak, the Super Nettles of America.  The pier was not exactly uninhabited.  In its center was a very orderly campsite belonging to a heavily bearded man who was just leaving on a bicycle.  Around the edges, nesting Canada geese didn't appreciate our arrival.  Right at the very end was the ancient wreck of a pick-up truck with a swastika on the side.

4. We followed the bike trail until it deposited us in the mall where our sister-in-law took us shopping last night.  We discovered we could get no further along the water, and we were hungry, so we bought sandwiches from the supermarket's tiny coffee shop and ate them there.  I bet not many tourists have eaten here, in fact it seems to be used at least partly by supermarket staff on their breaks.  The supermarket is strangely quiet for a Saturday lunchtime, and the car park is half empty.  How different from home.

5. Back on South Columbus Boulevard we discover that Pier 74 is gleaming and modern. We can see the Walt Whitman bridge quite close and we realize that we are near our destination.  We still weren't prepared for how suddenly the SS United States appeared as we passed the buildings.  She looms impressively over the dockyard, rusty and peeling with green patches all over her sides.  It was quite a sad sight.  Mike gave us the guided tour from behind the railings.  That is as close as we can get. 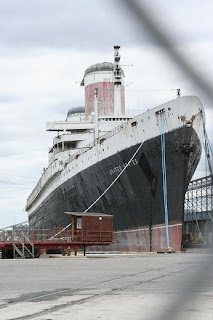 The SS United States, imprisoned in Pier 82
6. We just missed the number 25 bus and received estimates of the next one's arrival at between one hour and 40 minutes, so we flagged a cab back to Pier 5.
at 22:19