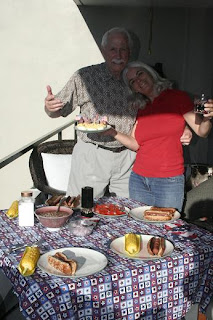 I'm wearing my red, white and blue 4th of July costume.  Too bad with that shadow, you can't see my white hair!  I thought I was being terribly original, but no I don't think so...  Everyone is wearing red, white and blue today.
This is my first 4th of July in the US, so I had no idea what to expect.  I thought with all the ambient, everyday patriotism, people would really let themselves go on the 4th, but actually, it's pretty low key.  It's rather like the 14th of July in France, except there's a special tradition of picnicking or barbecuing.  We had fabulous hot dogs, sweet corn and baked beans on the balcony, overlooking some of the San Francisco bay.  Then we watched the Washington DC and New York fireworks on television and the smaller ones from the balcony at the same time.  The TV fireworks were a blast because they're accompanied by a concert that's rather like the Proms in feel.  The quality of the music was up and down though.  The really striking performance was Steve Martin and the Steep Canyon Rangers (I think).  Steve Martin said they just played for the President of the United States and he imagined it must have been the thrill of his life!  I laughed with everyone else, until the violinist started doing his thing, at which point I realized that he had every right to mean it seriously.  That was the musical highlight of the show!
at 19:01