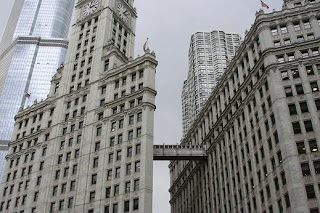 America's cathedrals to capitalism
We arrived in Chicago exhausted from getting to bed at about 1am, then waking up early in the morning to see what Indiana looked like and eat train breakfasts.  None of us had more than five hours sleep.  Our hotel turned out to be well placed for us, at the bottom end of Grant Park,  The result is that we enjoyed a very nice, 6 mile walk (well, lurch, really) through park, along lakeshore, Magnificent Mile, riverfront, ... really, most of Chicago.

Going the other way from our hotel are a bunch of museums for which we have a pass.  Antonia and I spent a couple of hours at the Field museum.  Like many natural history museums it has a dinosaur fossil gallery, but this one was incorporated into a whole exhibition on the history of life, and some processes of evolution.  That was cool, because it gave some context to the dinosaurs and allowed the museum to present a greater range of fossils than usual. 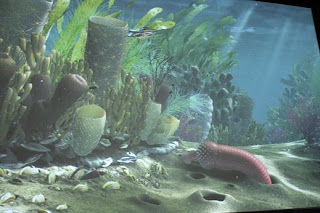 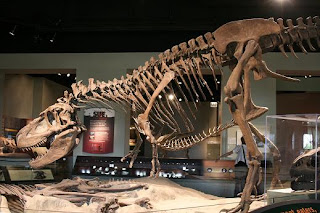 This dinosaur seems to have a sternum running all the way to its pelvis with separate riblets.
I never saw that before.
at 17:14