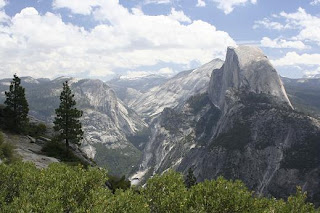 Half Dome
Sequoia groves and Wawona hotels are all very pleasant, but it wasn't until I saw this that I realised how justified Yosemite's international reputation really is.  This is just part of the view from Glacier Point.  I'm feeling quite privileged to be here really. 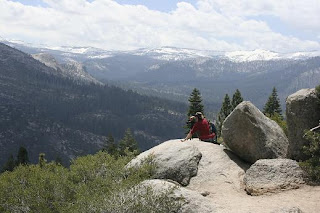 Mike doing his thing with the tripod.
There's lots of people at Glacier Point and even quite a few on the Panorama Trail we followed out to Illilouette Falls.  That's because it's one of the major trails down to Yosemite Valley and Half Dome.  We've been picking up a few interesting stories from the rangers about the consequences of 'crowding' which are so unusual for the American wilderness.