Day 85: Hike around Mariposa Grove and back to Wawona

Hike length: 11 miles (17.7km), 5 miles around Mariposa Grove, passing all the 'named' Sequoias, out to Wawona Point, then 6 miles from the Grove back to Wawona. The trail back is downhill all the way, we did a bit of climbing in the Grove. 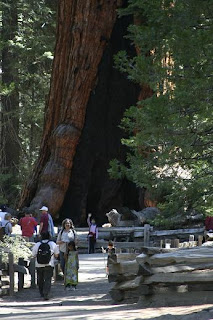 Right there in the back is Antonia waving from the base of Grizzly Giant, the largest and most visited sequoia in Mariposa Grove
Yosemite has the reputation of being very crowded.  Actually, if you're used to the population densities in Europe and the number of people you would usually find in parks like this, you wouldn't really notice.  It's not like Joshua Tree, where we almost had the place to ourselves.  There are some consequences of the 'crowding'.  For instance, there is a shuttle bus service from Wawona store to Mariposa Grove every half hour from 8:30am to 6:00pm.  This is really useful, because the Mariposa to Wawona trail is such an obvious one-way hike.  Second, the animals here are really tame.  The mule deer don't care if humans get within a few feet of them, and the squirrels will literally show off for the camera.  Apparently, we're all supposed to be quite cautious of bears, but we haven't seen one yet.  Third, on our first evening here, we picked up quite a bit of trash in the picnic ground.  When we went to the visitor center to get the Junior Ranger package, we found it included a trash bag which the kids are supposed to fill.  This seems like an excellent scam - the National Trust might want to get on board with that one!! 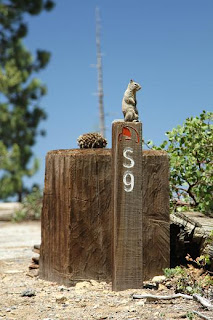 One of many show-off squirrels
The interesting thing about the crowding is that it's very localized.  Within perhaps a mile of the car park at Mariposa, and around the most famous sequoias, there are lots of people.  On the tourist 'tram' running through the grove, there are lots of people.  On most of the trails around the grove, there were just enough people to socialize with a bit.  It's a shame for most of the people that they aren't more adventurous, because the sequoia forests in the upper grove, around the museum, are the ones that have a really impressive 'alien planet' feel to them.  On the pleasant and easy 6 mile trail back to Wawona, we did not meet a soul, though I did meet an English lady at the hotel who was planning to do the same walk tomorrow.  In other words, it's really easy to get away from the crowds here!! 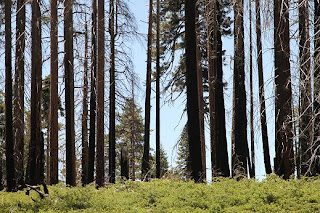 None of our photographs do justice to the forest, but at least in this one, you get the idea that these trees are tall.  And these aren't even sequoias!
at 18:54