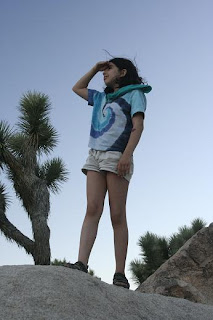 The Palins may have given up on their Round The USA Adventure, but we are made of much tougher stuff! (1).  We just keep on going!  Tomorrow we are making the longish drive to Yosemite where we're staying for a week.  After that, I gather from Mike that we're going to be spending a week or more sleeping in our campervan on friends' driveways.  So, if blogging is sporadic for a little while, it isn't because we sneaked off back home without telling anyone. (There is almost certainly going to be no internet in Yosemite).

Today is all about laundry, packing, cleaning up the house and the van, and collecting Antonia's well-earned Junior Ranger Patch for Joshua Tree.  We're also stocking up on food so that we can at least make our own breakfasts and lunches in Yosemite: better for our budgets, our health and our use of time....

(1) OK, so maybe this is not the ideal comparison to try to claim family credit points! 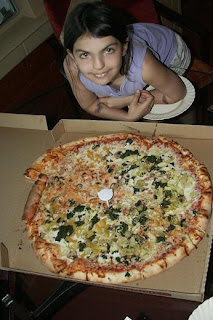 Thank goodness it wasn't a Texas pizza.  There go all our plans of sleeping lightly and getting up early.  Really, they sold us a large 21" pizza by mistake.  It's a shame we didn't enjoy it much, because the base was great.  It's probably our fault for ordering two toppings that had been preserved in vinegar, one that had been frozen and a final one that was canned in syrup.  The overall effect was vinegary sweetness.
at 23:56