Wow, we have internet at Yosemite!  That means I get to post my experiment in roadtrip blogging.  I just snap away as we're driving along, then pick out one picture for about every hour and a half.  It's a lot of fun, though if I had Photoshop, I could make the colors look more normal.  The van windows fade them out a bit. 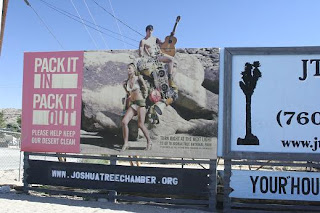 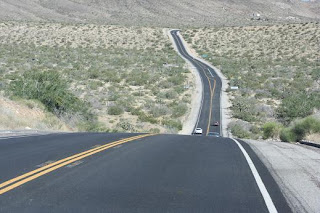 9:07 am - The 247 swoops down like a roller coaster between Yucca Valley and Landers.  We love this bit. 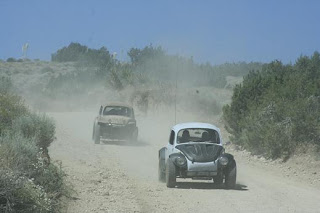 10:22 am - Somehow, this doesn't seem like the road to Yosemite.  This is the road to Deep Creek Hot Springs where Mike has decided to take a detour.  He's worried because his Internet friend was supposed to get back from here last week, and hasn't been heard of on the Internet.  He wants to ask random people at the ranch and car park if they know anything about his friend.  He wants us to fee grateful he doesn't spend 4 hours hiking in to the springs and back.  Predictably, at the end of an hour and a half, we still don't know any more about the friend than we did at the start.  This is the sort of behavior that has earned Mike the nickname Force of Chaos.  So 3.5 hours into our roadtrip, we have clocked up 41 miles towards Yosemite. 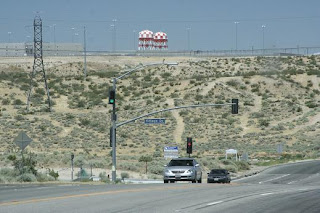 11:43 am - We are still in the Mojave Desert, trying to get out of the built up areas around Apple Valley. 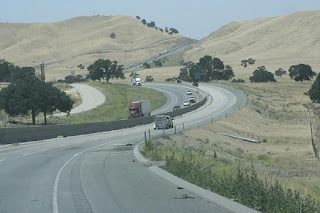 13:22 pm - We're back on the 58 where we should be, and no longer in the desert but in the golden hills of California.  They're covered in golden grass (surprise) and scattered with trees.  They look just like African savannah.  This is a very beautiful part of the road. 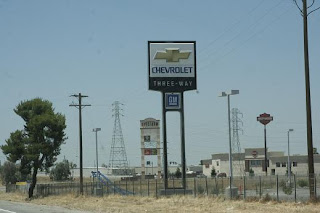 13:49 pm - After Bakersfield, the 99 takes us through California's Central Valley.  It may be a good place to grow food but it's as flat as a pancake and as boring as possible.  Actually, it looks a lot like the part of the south of France I grew up in, but with fewer redeeming features. 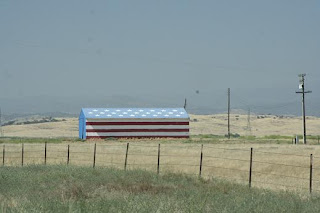 16:08 pm - Just outside Fresno, somebody decided to brighten the environment.  If you're going to be patriotic, you might as well go the whole the hog and paint your barn.  None of this wishy-washy buying a cheap flag at Wallmarts. 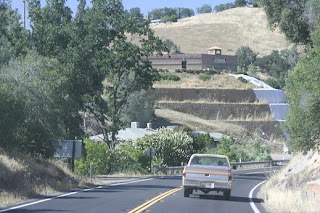 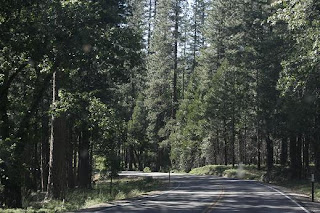 17:17pm - It's amazing how much the landscape has changed with one day's driving. 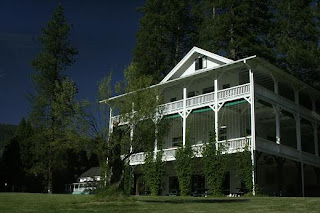 17:20 pm - We've arrived!  I am so glad to be here that it's only a little bit galling to think that if we hadn't made that detour to Deep Creek we would have arrived before the Visitor Center closed!  BTW, as soon as Mike got on the Internet, he found an email from his friend.
at 17:41