Yesterday, a man called at our house to deliver propane, and while he was here, he very kindly gave us lots of advice about things to see in the area.  As a result, we decided to change our plans for the weekend a bit.  Instead of camping at the south end of the park, we would go to Pioneertown and Big Bear Lake.  And since we would end up near our house on Saturday evening, we decided not to camp, which, quite honestly, saved a lot of time getting organized. 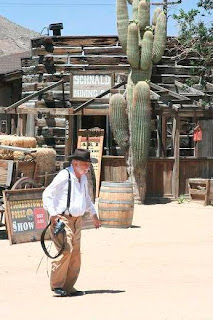 Pretend wild west town and cowboy
Apparently, the main reason we should go to Pioneertown was to eat at a place called Pappy and Harriet's, but our friend also mentioned the kid friendly Wild West main street and the cowboy shoot-em-up show.  Antonia and I have been to one of these cowboy movie set shows in Spain.  It was fun, and I was interested in making the comparison. 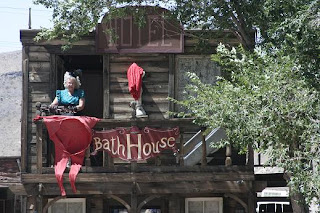 The address on sponsorship from the local bath house
I have to say that only in America does the cowboy shoot-em-up show begin with a lecture on gun safety for the children in the audience, together with the assurance that the actors are not using real guns.  Only in America is a demonstration of thuggery, sexual exploitation and violence (as expected in cowboy shows), interrupted with a speech on 'The Cowboy Creed' which is all about respecting your parents, helping people, and saying your prayers (I suppose that last part only shocks us foreigners, right?).  There were some other differences.  In the cowboy show we saw in Spain, the actors were professionals.  Here they are an amateur group.  They are very nice, but much less flamboyant than the professionals we saw.  They are not trained in performing stunts.  It's also telling that I thought the plot flowed a little better in Spanish, and I don't even understand Spanish very well. 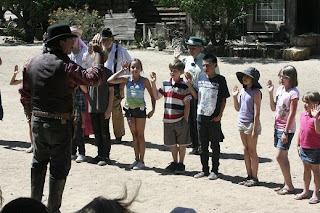 Antonia and the other kids swearing a solemn oath never to play with guns.  After this morning's incident, I'm wondering if this will be counterproductive.
Getting more analytical, I think my main criticism is that with one thing and another, they were obviously not comfortable with the outrageously bad behavior expected in shoot-em-up shows.  Unfortunately, it's the outrageousness that keeps the show firmly on the side of fiction.  These guys know you can't have cowboys in a cowboy show behaving like Sunday School teachers (which seems to be their natural inclination) but they toned it down so much that the stuff they had to leave in came across as a bit sordid, rather than far-fetched enough to be entertaining.  Maybe it all has something to do with the fact that it's related to their culture and history, whereas to us, cowboys are on a par with space aliens, and just a big laugh.  But in that case, why not do something that reflects the real history of the west, instead of the Hollywood fictional version. 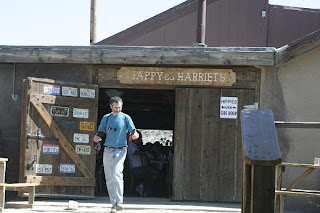 Mike emerging from Pappy and Harriet's with his beer.  He's using the cowboys entrance.  The white sign on the door says "Hippies use side door"
Eating at Pappy and Harriet's was much more the main experience of the afternoon.  It's a large pub filled with 'western' objects.  In that respect, it reminds me of the chalet bars and restaurants at home, which are filled with mountain objects, like old skis and portraits of cows.  Here we have US license plates and portraits of old men and nubile young women with guns.  Also lots of amusing signs about keeping the unruly customers in order. 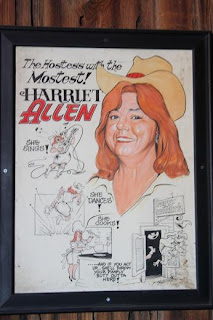 Harriet and all the things she can do.   If you act up she throws "your pimply butt outta here"
Pappy and Harriet's is quite well-known for having live music in the evening, but that was going to be a bit too late and/or expensive for us.  The menu is the usual American fare of burgers and hotdogs, with a few more unusual sandwiches, like catfish.  The great thing is that it is all real food.  The burgers are made from real beef, and cooked over an outdoor barbecue pit.  It's a far cry from the cardboard objects we ate a couple of nights ago.  We stayed there soaking up the atmosphere and the food for quite a while, and had a good time.
at 17:28