It's the weekend, so we had time to drive all the way through Joshua Tree National Park, visiting the things that are too far from home for us to reach on a weekday.  We drove straight through our usual territory in the north-western part of the park.

1st stop: Skull Rock
To get here we drove across what seems to be the highest plateau in the park.  It feels really different here, because we aren't surrounded by hills, just a few boulder piles.  It is much less lush, and the Joshua Trees seem to be struggling.  For the first time since we've been here, the park feels busy, and there are many European tourists here as well as Americans.  There are lots of rock 'sculptures' here, apart from skull rock.  This is my favorite. 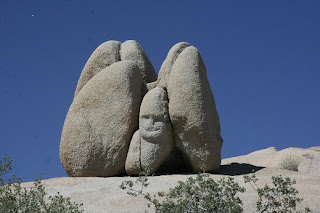 2nd stop: Cholla Cactus Gardens
As we dropped down off the upper plateau into the southern part of the park, we reached a type of desert that makes the Joshua Tree forests look like tropical jungle.  We drove through a pass overlooking a black plain that seemed like a good place to film Mordor in Lord of the Rings, except that, on closer inspection, it turned out to be full of creosote bushes.  Just before we got into it we arrived at a large patch of nothing but enormous Cholla cactuses, some of them taller than an adult. 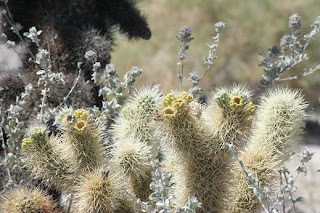 The entrance to the Cholla Garden nature trail is filled with warning signs about the hazards of chollas, including a quote by someone called J Smeaton Chase who said "If the plant bears any helpful or even innocent purpose in the scheme of things on this planet, I should be glad to hear of it."

I can think of one!!!  I can think of one!!  It's to teach young people that when big red warning signs have been posted all around saying 'Do not touch the cholla, or else', it's to save them from the trauma of learning by experience.  Sadly, this is something that also has to be learned, and it doesn't seem to really sink in until the mid-twenties.  So, of course, Antonia touched the cholla.  Before she knew it a cholla ball had detached itself from the parent plant and its spikes were well-embedded in her hand.  When we attempted to pull it off, the spikes from the ball came away easily, so we couldn't get a grip on the thing.  Luckily, Mike has a thick canvas hat which we were able to pull it off with.  We then had to pry the remaining spikes out of Antonia's hand and the hat with tweezers.  I need hardly mention that she was crying a lot, bleeding a bit, and did not enjoy her visit to Cholla Cactus Garden.

3rd stop: Ocotillo patch
We saw a strange plant growing about 3 times as high as an adult, guessed it was an ocotillo, and stopped to have a closer look. 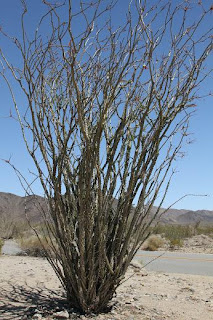 4th stop: Cottonwood Spring
It was getting near lunchtime, so we just took a short stroll through the botanical wonderland created by the spring.  We are much lower here than our starting point and it is hotter, but we've got lucky again and the temperature is tolerable. 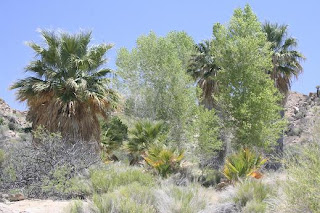 We drove back around the outside of the park, along a highway littered with strips of black rubber from abandoned tyres, listening to Spanish radio.  At the intersection of I10 and 62 we came across the biggest windfarm we have ever seen, then we drove up passes in the hills back to Yucca Valley. 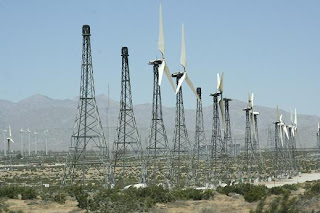