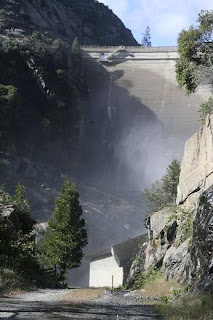 The dam face at Hetch Hetchy
At lunchtime, Mike said quite casually "Shall we go to Hetch Hetchy", and I said yes, but by the time we'd been driving for 45 minutes it emerged he had no idea how far away it was!  Oh well...  To get to Hetch Hetchy, you leave Yosemite Park and drive through the Stanislaus National Forest.  This includes 2 miles through some of the most beautiful open woodland I've seen, which turns out to be private property.  Then you re-enter Yosemite and drive along the kind of skimpy, crumbling mountain road we used to have in France back in the 1970s.  Except that we all had smaller non-automatic cars back then as well. 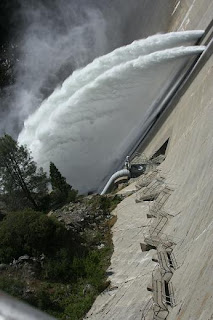 Artificial waterfall....
I'm glad we saw Hetch Hetchy, but it isn't nearly as stunning as Yosemite Valley.  At least the weather had improved, and we hung around for a while and did some photography.  I'm really into photographing dams while Mike is interested in waterfalls.  This is one of the wettest years Yosemite has had recently, and the waterfalls are particularly full and impressive.  Since it's the first time we've seen them, it's probably too easy for us to take them for granted.  Some other hikers did just that this morning, and unfortunately, there is now a helicopter out, looking for one of them.  It's sad that people find it hard to tell the difference between a picture postcard and several tons of water per second until it's too late.  A ranger told us that the most popular book in the Yosemite bookshops is the one called Death in Yosemite.  Having lived in mountains, I imagine they could bring out a new volume every year - and still not scare people into sensible behavior!! 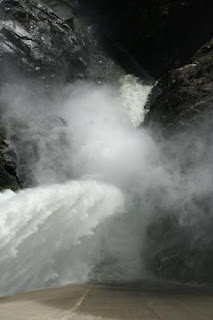 ... real power.
Speaking of not being sensible, we're not exactly risking our lives but we did get back to our hotel at 9:00pm, got told off for being late with our packed lunch order, vaguely threw together the stuff for a 13-mile hike tomorrow, and fell asleep by 9:30 without eating dinner.  I really don't like the kind of car touring we did today, so even though I can put up with it in bad weather, I regretted spending so much time on it I exhausted myself.
at 01:27