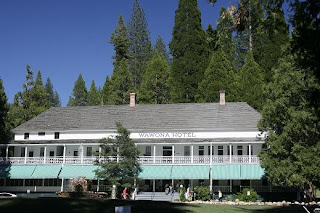 Wawona Hotel main building (which is really old)
We decided to take it easy today, so this is the perfect opportunity to talk about the Wawona Hotel, where we're spending the week.  I booked it way back in October 2010, and already there were no rooms with private bathrooms left.  Still, it cost more than we usually pay for a hotel, so is it worth it?  People who expect a gold-plated jacuzzi when they've spent lots of money on a room, and people who don't have 'ambience' on their list of values are probably better off somewhere else.  For example, in Wawona campsite.  We met a guy who drove with his family down from Chicago in about two and a half days, scared himself silly on the Tioga Pass (I bet he has an automatic), and arrived at dusk to the joys of pitching tents and figuring out how to use the bear-proof food safe.  Personally, I have visions of not being able to operate a bear-proof food safe myself first thing in the morning. 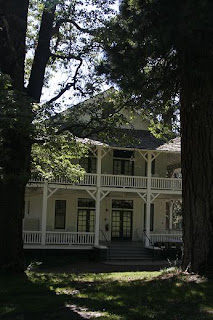 Wawona annex looking cute.
I'm really in to ambience, and find it's something I can't really set a price on.  I do love the retro, early 20th century feel, and much more look forward to getting back to the Wawona after a long day's hike than to a campsite! When we arrived here on Saturday, it was full of unusually healthy looking Americans eating barbecue on the lawn, or throwing frisbees to equally healthy looking children, or drinking martinis in the bar while wearing floral print dresses, or laying out their backpacking equipment on the veranda for a final sort through.  The whole thing reminds me of when I was a boy scout, which I never was, so it's a little bit strange.  So what if it's a stroll along the veranda to the toilets or the showers, because we're here for the fresh air, right? 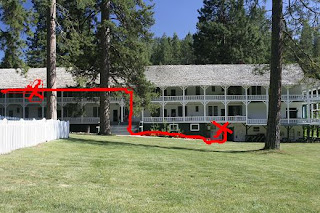 Our room on the top veranda, and the route to the shower on the ground floor!
Breakfast is kind of bustling and straightforward because most people just want to get off on their hikes.  There is still time for that exotic native ceremony known as the raising of the flag.  These three guys go out to the flag pole and two of them stand to attention while one of them whistles the national anthem and the third raises the flag.  Anybody who's in the vicinity stands to attention and when it's over they all clap.  I must say, it was pretty impressive whistling.  After that, Mike and Antonia went off on a ranger guided walk, while I settled down on the veranda with a cup of coffee to do some work.  The way to get coffee in your room at the Wawona is to bring a thermos and some instant coffee with you, and ask the kitchen to fill the thermos up. The way to get a WIFI network just outside your room is to be married to my husband!  (Well, the hotel WIFI is kind of working for lots of people, ours is just more sophisticated). 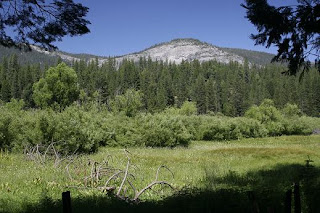 Wawona Meadow looking like our own Chartreuse
When the guys got back, we had the packed lunch which the Wawona include with our hiker's package on the lawn.  It was so lovely sitting there looking at the golf course, I almost contemplated having a go at golf.  We decided to go on a 3-mile stroll around the Wawona Meadow loop instead.  In the evening, we decided to have dinner in the Wawona's restaurant.  This was not at all necessary, because they give us so much for our lunches, that the left-overs and the other food we have would easily feed us.  We just wanted to try it.  It turned out to be one of the best meals I've every had in the US (but European style portion sizes, thank goodness, and prices, unfortunately). We loved the pine nut tart. The idea was that the restaurant meal would leave us in better shape for the Monday night star-gazing session at 9pm.  In reality we were already realizing that we'd squeezed a lot into our 'quiet' day and that there was no way we were getting up early to hike 14 miles the next day.  Oh well!
at 05:25