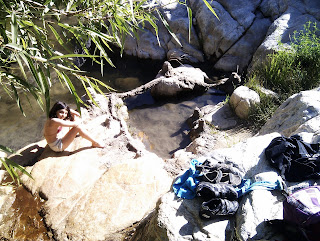 I've been working virtually with this person named John for a couple of years now. It turned out that we were going to be passing right by Deep Creek where he was headed. I offered to give him a lift from LAX to there after we picked up the van. We dropped him in the middle of nowhere last week. He invited us to come back and hang out with him the following weekend and that's what we did this weekend.

On Saturday I drove the van 1.5 hours back there alone not quite knowing what to expect. It's a well known "naturist" reserve. I met John at the entrance, we hiked in together. It's about a 2 mile down hill walk down to a creek where there's a half dozen hot springs. I didn't see any naturists until we were down at the creek. In fact, I have to say that most people were wearing bathing suits.
John recounted to me a frightening story that happened a couple days earlier. A young man had come down there with a tent which John helped him set up. He then commenced to drink himself into a stupor. With the heat, insufficient water, he became dehydrated and other people there who feared for his safety called 911. A helicopter came. John helped the medics find the kid and he was airlifted out. What remained was his tent, backpack, wallet, and cell phone. John and I decided to pack up his belongings and I offered to take them to the police. I tried to give it to a ranger, and to the people guarding the entrance to the creek, but neither of them would accept it and told me I had to bring it to the police.
On Sunday I drove down there again with Antonia. We had a fabulous time on the sandy beach of the creek, building sand castles, playing in the warm water, and taking in the sun. The water is refreshingly cool and underneath, the sand is delightfully warm as the warm water from the natural hot spring filters up through it.
On our way home, I pulled out this guy's wallet, looked up his address on my GPS and realized it was closer to bring his things to his address than to the police since it was practically on the way back here. The kid was very happy to see all his stuff intact. Apparently in the helicopter the medics had administered CPR and defibrillated him 3 times to restart his heart. After, he spent 3 days in the ICU. He's very lucky to be alive. If the medics had arrived minutes later, he'd certainly have died.
at 19:24