It was so hot today, we decided to go for a picnic dinner in the desert, instead of going out in the late afternoon.  As soon as the sun is down, the light is very soft, and it is even quite cool. 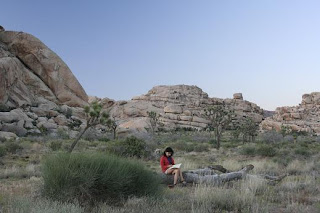 I wanted to wait to see the moonrise, but it took an awfully long time coming, considering it is nearly a full moon.  It was strange to see the horizon bright towards the rising moon in the east and the setting sun in the west, with just a band of dark sky stretching from north to south.  We were in a basin surrounded by hills on all sides, and the moon was going to come up over the highest hill.  That was why it was taking so long.  I remembered that in our own mountains at home, we can see the light from the sun make its way down the opposite mountainside, until, when it reaches us, the sun comes up.  I turned west and saw that the same was happening here.  The hills at the other side of the basin were bright with moonlight creeping towards us.  Within minutes of it reaching the nearest boulder piles, it finally started to come up where we were standing.

And as soon as the moon came up, Mike stopped watching his umpteenth episode of The Wire in the back of the campervan and sprang into action, taking moonlight shots. 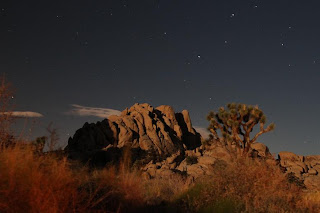