Day 79: And now for something completely different 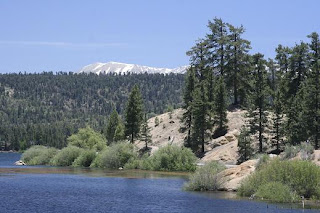 Following the advice of our propane delivery guy, we made the 2-hour drive up to Big Bear today.  I am a planning freak so not many of our trips are as totally impromptu as this.  I tend to research everything we need to know before we set out. I usually even know the layout of a place before we arrive.  I thought it would be interesting to analyze the differences between the two types of trip.

OK, it's not as if I did no planning.  I did ask Mike to look up the temperature at Big Bear, and he said 16 Centigrade, so we packed our coats.  It turned out that wherever he got that from, it was a bit unreliable on the low side.  We threw together a picnic, set the GPS for Big Bear Lake, and headed off into the unknown round about 9:30am.  Two hours later we pulled into Big Bear City, admiring the complete change in scenery and style of houses, and Mike said "Now what?"

Well, now obviously, we find a source of information! I hazarded a guess that the north side of the lake might be most interesting, and on our way there we found signposts to the Discovery Center.  First point of call.  We got trail maps, advice on picnic sites, a list of boat rental places, then drove off to a picnic site about 15 minutes away.  When we arrived there, we found a sign that said we couldn't park without a Forest Adventure Permit, so we drove back to the Discovery Center with Mike fuming because they hadn't told us that.  He was also determined to see if our National Park Pass would work instead.  I didn't think so, but it turns out it is good for Federal Recreation Lands as well as National Parks.  We didn't need to get anything after all. We drove back and had our picnic in the cool shade of amazingly tall pine trees by the blue lake. 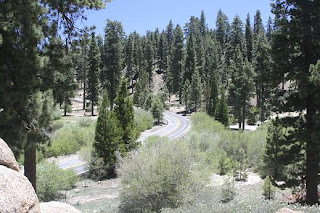 We still needed to make a plan for doing the things we actually wanted to do.  We wanted to go on a hike up the Gray's Peak trail which was right there AND go boating AND I wanted to swim in the lake.  We decided that if we were to do all those things, we needed to figure out how long the boat places stayed open and what they cost.  It would be faster to call them on the phone, but they didn't answer, so we had to drive around to the nearest marina, find out they shut at 5.00pm and drive back to our trail head.  It was 1:00pm by then and I already knew we didn't have time to complete the trail and go boating, but I was happy to go along with the other two, if they decided to turn back after a while.  It's hard though, to turn back on a trail that has a summit as its destination, so in the end we got back to the car at 5:00pm and didn't do any water-based activities.  We did have a really nice hike though, our first real hike on this trip.  We found that we had taken just enough water with us, because although the temperature here is pleasantly warm, it's still very dry.

I think one of the things that's going to be really special for me and Antonia on this trip round the world is thanks to the amount of David Attenborough documentaries we've both watched.  Sometimes, we come across something we're not likely to have seen in real life before, but we know what it is from David Attenborough.  We get really excited about recognizing things and inspecting them.  Like the holes in this tree trunk.  They are made by woodpeckers which store a single acorn in each hole. 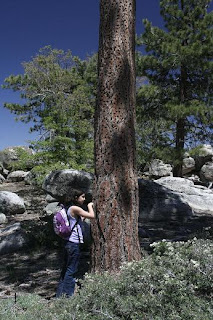 The other unwitting highlight of our hike was on the way down from Gray's Peak when met Slick the horse, and his owner. They were going up to the top of Gray's Peak where there are some nice bits of lush grass.  I was really interested in Slick because he was such an American horse.  He had an American-style saddle, and no horseshoes on his hooves.  His owner was pretty interesting to foreign eyes too, with his cowboy hat, denim dungarees and checked shirt and the really fancy leather boots. It's funny to think how differently people (and horses) dress here from in Europe, for a common activity like horse riding.

Slick's owner said he was born wild in Nevada, was only half-tame, and that eleven years ago, he had got him out of 'jail' where he'd been sent for being too wild.  I'm not sure what that metaphor means in concrete terms.  He told us about trimming Slick's hooves and how he wears slip-on shoes when he's going to be going over rocks. It turned out that Slick goes down to Pioneertown pretty often.  I suppose he plays at being a cowboy horse and his owner likes to eat at... guess where... Pappy and Harriet's!  That place really is the place to be around here.

However, Mike suddenly decided he wanted to eat Mexican tonight, so he hooked up his wifi device to his cell phone so I could find us a Yucca Valley Mexican restaurant on the way home.  I soon realized that people in Yucca Valley rate places a lot on the price/quantity ratio, rather than on quality, interest, genuineness or any of those other qualities that interest weird foreigners.  I plumped for Las Palmas which turned out to be a mixture of amazingly excellent (lime margaritas, salsa, meatball soup), and just kind of average.  It was extremely copious, so I guess it meets the local requirements.
at 21:50