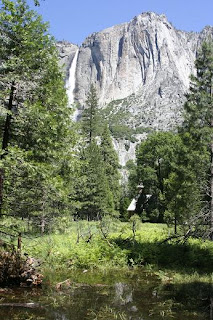 Yosemite Falls from behind the chapel
There is one really good way to see Yosemite Valley that is fun, easy and accessible and has nothing to do with traffic: walking the Yosemite Valley Loop from wherever you happen to be.  The hike is about 13 miles (20 km) of flat, easy hiking.  For an adult walking reasonably fast, there is plenty of extra time to hike into Bridalveil and the base of the Yosemite falls, and to see the sights of Yosemite Village. We drove into the Bridalveil Fall car park which is the nearest to Wawona. The walk parallels the road, so we were aware of the traffic most of the time, except when its noise was covered by the roar of torrents and waterfalls.  Mostly, being near the traffic just made me feel smug that I wasn't in it.  In the morning, we met one other person on this beautiful trail.  In the afternoon, once we were clear of Yosemite Falls, we met a couple of small groups.  I can't imagine why there aren't more people taking this opportunity to see the valley in peace. 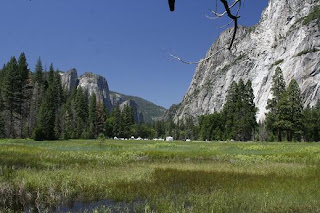 Yosemite Valley meadow with traffic in the background!
Because of the abundant water this year, we had a few extra challenges when we did this walk. I noticed the previous day that the meadows were flooded and wondered if the northside part of the walk would be open at all.  The southside part runs along the uphill side of the road the whole way so the only problem was a few fuller than usual streams.  After we dropped Mike off in Yosemite Village for his photography course, the fun started.  The first time we found the path flooded we went back to the road for a few meters.  The second time, the Merced River had overflown onto the path, but the water was still and shallow, and the road was harder to get to, so we took our shoes and socks off and waded.  It was freezing!! Then, just under El Capitan, we found we had a choice between wading through the meadow or backtracking over a mile.  We were sharing the path wth tadpoles and water beetles and Antonia was using her stick to test the depth as we went along. In the end, it came up to my mid-thighs, which was pretty deep for Antonia, but the water was warm and still, and the path underneath was firm, or we couldn't have done it. Our last challenge was a torrent that had really overflown the path and which we judged impassable.  We hiked through the woods back to the road, then had to hunt to pick up the path again. 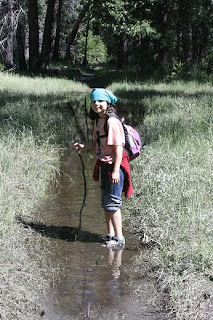 Antonia wading through meadows
Not surprisingly, we got back to the car quite late, just in time to pick Mike up at the end of his workshop.  It's a real shame we ended up having to drive through Yosemite Valley at all.  I've already said what I think of the driving here.  I was doing really well until I was stopped at an intersection behind two other cars and somebody drove into the back of me.  By the time I had exchanged names and numbers with the guy who put a dent in the bumper of our camper van I was an hour late to meet Mike.  I had a fantastic hike, and even the little bump at the end of the day isn't too serious (I hope) but I am completely exhausted. 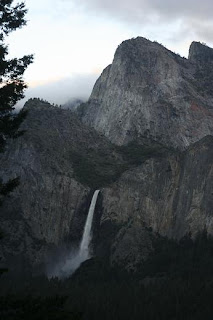 Bridalveil from Wawona Tunnel in the evening
at 02:22